A brand new metropolis built from the ground up with tech powered urban design. A white elephant nobody wants to live in. An eco-friendly suburb. The term “smart city” has evoked various descriptions, but it’s the world’s existing cities which will need to smarten up as Internet of Things (IoT) technology evolves and the world reopens for business and travel.

All cities can improve the provision and development of urban services through IoT technology – not just new ones built to be smart from the start, like Kenya’s Konza Technopolis. For example, a smart city might be simply one with improved capacity planning and management. By analysing data on public transport, “flow” models can be made which predict usage at certain times and help transport companies prepare in advance for peak periods.

Other quite small city modifications can be called “smart”. Intelligent street-lighting systems that brighten and dim LED bulbs based on usage are both sustainable and help cities to save costs. Smart meters and digitised grids meanwhile can help cities meet emissions targets.

GlobalData’s thematic research on smart cities forecasts the market to grow to $231bn by 2024. The smart city market breaks down into five constituent parts, with the biggest growth coming from smart metering, followed by smart city platforms and smart buildings. Smart signage and smart payment systems make up the rest of the market. 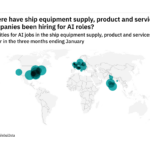 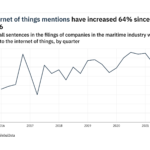 Analysis
Filings buzz in the maritime industry: 23% increase in internet of things mentions in Q3 of 2021

GlobalData’s tracking of completed deals recorded a total of 151 transactions across the globe over the two years, with 80 and 71 deals having been recorded in 2019 and 2020 respectively, signifying a 11.25% YoY decrease.

Deal activity dropped across all continents, but not necessarily by country. China and the US saw little to no difference in deal activity across the two years. The United Kingdom was the country experiencing the biggest drop, with a 73.33% decrease in completed deals, falling from 15 deals in 2019 to just 4 in 2020.

Smart city deals are usually linked to several different sectors; AI and big data are intimately linked, for instance. Most smart-city deals recorded by GlobalData were linked to the IoT sector, with 316 completed in 2019 compared to 325 in 2020, totalling a 2.84% jump YoY and a difference of $6.58bn. In 2019, $5.33bn was injected into the sector, a figure that more than doubled to $11.91bn in 2020. The themes of Digitalisation, Big Data and Digital Media dropped in tandem with the lessened deal activity in smart cities, but AI rose by 6.89% with 58 to 62 related deals last year at a two-year total value of $7.14bn.

Using GlobalData’s IoT Deployment Tracker, we are able to see how smart city projects utilised IoT in 2019 and 2020. As the chart below shows, 131 of 1349 IoT projects announced in these years were to be deployed for smart city implementation, representing 9.71% of worldwide projects.

Some 90.8% of announced IoT-smart city deployments in both 2019 and 2020 were in the domain of civil infrastructure, with government as the main vertical alongside communications, construction, retail, transport, travel, education and utilities. Interestingly, despite North America’s spending power across themes, 48.8% of these announced deployments are Europe-based, with the rest shared across the Americas, Asia-Pacific, the Middle-East and Africa (see figure 2).

All regions dropped in this regard, with Asia-Pacific having the smallest drop (26.3%) compared to Europe and North America, its comparable peers in size and smart investment. North America saw the steepest decline of announcements at 80%.

The state of play in smart cities

An analysis from City Monitor earlier this year suggests that Covid-19’s impact in 2020 is behind the slowdown in momentum outside of China and the US. The decline, it argues, was already in place before the pandemic, with projects delayed or scrapped due to budget and revenue uncertainty, and city governments shifting their priorities towards economic recovery and digital equity.

Another possible explanation can be found in Verdict’s recent look at Big Tech’s smart city power grab. While big investments come hand-in-hand with Big Tech, this also means concern from communities on the handling of public data.

“The failure of (Sidewalk Labs) overshadows other good smart cities engagements. It was a high-profile project and the data privacy concerns will chime with other cities and citizens.”

Sidewalk Labs has maintained, including in emails to Verdict, that it stopped the project because of Covid-19 uncertainties, not because of the highly publicised data privacy concerns.

“We don’t dispute that the public raised important data privacy concerns around the project,” a Sidewalk Labs spokesperson tells Verdict.

“It is factually inaccurate to state that those concerns contributed to the end of the project, since we publicly announced project alignment with our partner, Waterfront Toronto, on digital governance issues in Fall 2019.”

Twin cities are the future

The business perspective on smart cities is a varied one, with sources telling City Monitor that startups have enjoyed more success than bigger names when selling to local governments. Smaller firms tend to offer finely targeted solutions to the very distinct and often emergency problems that have come about during the pandemic. Smart sensors, on the other hand, are becoming less attractive to local authorities unless tailored to specific and pressing needs.

The lack of a sensor for Covid-19 and fast contagions is highlighted as a problem in the report, but there may be a solution: digital twins.

A digital twin is a digital representation of a physical asset that promises a single source of the truth and can be combined to build an in-depth view of entire systems, from traffic to the impact of construction and roadworks. Singapore is one of the most advanced adopters of digital twins through its Virtual Singapore project, but most of the world’s smart cities are developing digital twins.

When it comes to mitigating the spread of infections, a digital twin from Cardiff University may pave a way for smart cities to “sense” disease spread. Its Computational Urban Sustainability Platform (CUSP) is a digital twin model for capturing, monitoring, analysing and forecasting real-time Covid infections in the city of Cardiff, Wales.

Powered by IoT, its Cardiff twin uses sources such as social media and health data to track and predict Covid hot spots, giving authorities access to pervasive intelligence at the level of users, spaces, buildings, streets, cities and regions.

5G and the smart city

A rosier future of smart cities may depend on full appearance of the IoT. As Verdict recently reported, IoT is potentially an even more pervasive kind of tech than today’s computers and mobile devices  —  and yet it isn’t pervasive as things stand.

But before all this can happen, the IoT will also need a unified and global cyber security standard. This is because as the number of connected devices increases, so does a massive security gap with more and more potential for cyberattacks.

Cities around the world, whether smart or “dumb”, are a target for cybercriminals. The kind of massive cyberattacks that temporarily shuttered Atlanta in 2018 could possibly become easier with an unsecured IoT.

The multi-layered nature of IoT creates a huge attack surface, whether through devices, connections, data, apps or services. In response, regulatory initiatives such as the EU’s General Data Protection Regulation are slowly emerging. More manufacturers meanwhile are designing IoT devices with prebuilt cyber applications, whilst also providing users with the necessary software updates to patch security breaches. But there remain no globally accepted standards, and current IoT ecosystems lack adequate security regulations, with most devices having weak or no security controls.

This is why Bicknell urges caution, saying there’s still “time for something of a reset” before the IoT reaches its true potential.

“I think that steamroller is still in a low gear,” he says. “Business hasn’t got up to speed yet  –  there are still too many uncertainties about Covid.

“Smart cities are now ‘uncertain cities’, still trying to predict what the future holds. Cyberattacks are not diminishing in number or severity. Dabbing the brakes now might be a smart move.”

It’s important to bear in mind that attacks on industrial equipment and critical national infrastructure can be a significant threat, as shown by the recent Colonial Pipeline hack. Perhaps the threat is best expressed in GlobalData’s recent report on the IoT.

“If a cyberattack hits your PC, it is a nuisance,” as its authors state, “but if your connected car suffers a cyberattack, it could kill you.”