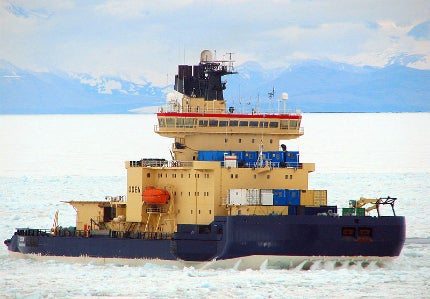 According to reports, the route through the Bering Strait is expected to cut the journey time by about 12 to 15 days, compared to the traditional route via the Suez Canal and Mediterranean Sea.

A passenger ferry named MV Thomas Aquinas has sunk after colliding with the cargo ship MV Sulpicio Express 7 on the evening of Friday 16 August, near the central port of Cebu, killing at least 52 people, with about 68 still missing.

The 138m-long Thomas Aquinas, operated by Chinese firm 2Go Group, was carrying 723 passengers and 118 crew members, out of whom more than 750 have reportedly been rescued.

According to reports, the 11,000t Thomas Aquinas was entering the pier when the cargo vessel on its way out suddenly collided with the ferry.

The project, called MONALISA Ice (MICE), aims to improve safety as maritime traffic in the Arctic region continues to increase, with the new system expected to improve the potential for sea rescues, icebreaker assistance and environmental protection.

Poly Shield Technologies has started a feasibility study for the possible use of its DSOX-15 Fuel Purification System as an option to supply low-sulphur marine fuel from a land-based facility.

The council also asked member countries to prosecute perpetrators in accordance with the 1982 UN Convention on the Law of the Sea, as well as international human rights law.

Designed for two or more users, the new concept includes an offshore, smart terminal arrangement and docking system that can house ocean-going vessels and barges.

Bechtel said it expects the design concept to open new market opportunities for African ports by increasing capacity, as well as reducing construction and operation costs.