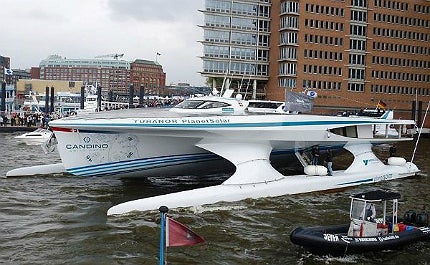 Out of the ten vessels, five will be of 18,000 twenty-foot equivalent units (teu) each, while the remaining will be 14,000teu vessels.

Global Ports Investments, together with its subsidiaries and joint ventures, has entered into agreements to buy NCC Group for a consideration of $291m in cash and an 18% stake in the merged group.

The proposed acquisition of NCC Group, a major container terminals operator in Russia, is intended to strengthen Global Ports’ position in the Russian container market.

Solar-powered catamaran MS Turanor Planetsolar has arrived in the UK and will be docked at Canary Wharf in London, after a two-month scientific expedition tracking the Gulf Stream.

Carnival, a Miami-based cruise ship company, has signed a deal with the US Environmental Protection Agency (EPA) to reduce air pollution caused by its fleet of cruise ships off North American coasts.

Carnival will invest more than $180m in a new technology to clean the fuel exhaust on around a third of its cruise ships to meet air pollution standards set by the International Maritime Organization, which will come into force from 2015.

According to the new standards, all oceangoing vessels should start using lower-sulphur fuel when they are within 200 miles of Canada and the US.

The company financed the purchase from its recent $200m credit facility with ING Bank and HSH Nordbank, and through selling of its public offering of 13,685,000 common units at a rate of $9.25 per unit.

The vessels, with a bollard pull in excess of 50 tonnes, will be used to provide support for larger seismic vessels that conduct seismic surveys for several months at a time.

Each vessel has an overall length of 64.9m with a length of 58.2m between perpendiculars.

US scientists are set to test the beta version of the newly developed ‘Whale Spotter’ app, which is designed to track whales near the San Francisco Bay and prevent them from being struck by ships.

The testing will be conducted during a week-long research cruise and scientists from Point Blue Conservation Science (Point Blue), the National Oceanic and Atmospheric Administration’s (NOAA) Cordell Bank and Gulf of Farallones National Marine Sanctuaries will record whale sightings with the app.

The scientists will also monitor seabirds, fish and the marine food web.