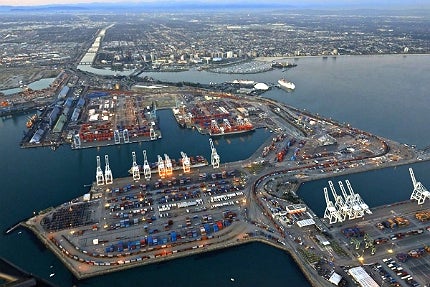 It was also the first port to in the world to use AMP (alternative maritime power – a term which it has trademarked), which is also globally known as shore power, cold ironing or OPS (on-shore power supply).

“Port of Los Angeles has an annual revenue of $370m and handles around $190bn worth of cargo and 170 million tonnes of cargo.”

“By January 2014, that number will jump to 26 berths, as the port moves forward with plans to equip every container terminal with AMP.”

The port has become a recognised world leader in port pollution control and won the Lloyd’s List environmental award in 2012, for reducing emissions by up to 75% since 2005.

One of the port’s biggest challenges has been to develop international power standards to make AMP more commercially viable around the world, explained Sanfield.

“The port has become a recognised world leader in port pollution control and won the Lloyd’s List environmental award in 2012.”

“Fundamental challenges included developing standards for a world that does not operate on the same electrical system frequency and a global fleet that does not run on a common voltage,” he said.

However, the International Organization for Standardization (ISO), the International Electrotechnical Commission (IEC) and the Institute of Electrical and Electronics Engineers (IEEE) developed a joint working group – after working with ports, ocean carriers and engineers – to eventually publish the standard in July 2012 that would make lights, heating, refrigeration and other on-board systems run on shore power.

While cruise ships generally require eight to 13 megawatts of power, the AMP system for these vessels can deliver up to 40MW of power – 20MW to each of the two ships simultaneously.

The environmental benefits of AMP are clear, says Sanfield. “Ships can be modified to reduce pollution, but to totally eliminate local engine emissions, shore power is the best option,” he said.

“The operational benefits are also clear. When ships at berth plug in, maintenance and repairs can be done on equipment not in operation, vessels conserve fuel, and the cost of running on board systems is lower. Noise pollution from the engines is also eliminated.”

It was in 2008, at the Pier G container terminal, that the Port of Long Beach’s first shore power-equipped berth first opened. The port invested $8m to install the equipment, which made up part of a $21m berth improvement programme.

“Shore power reduces 95% of the emissions from ships at berth. So anyone who breathes air benefits, from the people working right on the berthed ship and docks to the residents far inland where air pollution can travel.”

“The California Air Resources Board (CARB) adopted a regulation in December 2007 to reduce emissions from diesel auxiliary engines on ships while at-berth for container, cruise and reefer vessels,” said Peterson. “The regulation requires that auxiliary diesel engines be shut down for specified percentages of fleet visits.”

For decades the Port of Rotterdam, in the Netherlands, has been Europe’s leading port – and from 1962 until 2002 it was the world’s busiest, until it was taken over first by Singapore and then by Shanghai. It handles around 430 million tonnes of cargo each year and has an annual revenue of more than €500m.

“In 2011, the Port of Los Angeles also became the first port worldwide to provide AMP to three separate cruise lines.”

Forming part of a wider plan to reduce its fleet’s fuel consumption, Stena Line invested in the infrastructure needed to power two vessels at the same time from the local grid while berthed in the port.

“The investment for the shore infrastructure has been €2.7m and equipping the vessels required a similar amount,” added Prinssen.