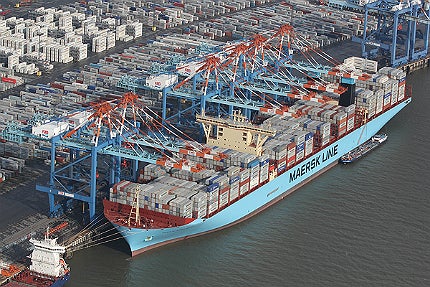 The 400m-long Mærsk McKinney Møller, is the world’s longest ship. It is the first container ship in the Triple E class, Maersk’s most energy efficient ships. The class is owned by A. P. Moller-Maersk Group and operated by Maersk Line.

The container vessel features a twin-skeg propulsion system, which includes two engines and two propellers. The two propellers comprise of four blades each and the two ultra-long-stroke engines have an output of 30,000kW each. The maximum speed of the vessel is 23kt.

Maersk E-class ships are 398m long ranking as the second longest in the world. Emma Maersk, the first vessel in the E-series, was delivered in 2006.

The container vessel has a beam of 56m, draught of 16.02m and depth of 30m. Its maximum tonnage capacity is 11,000 TEU. It is owned and operated by A. P. Moller-Maersk Group and constructed by Odense Steel Shipyard in Denmark.

The vessels are 54m wide and have a draft of 16m and tonnage capacity of 16,020 TEU. Each vessel is propelled by a 14-cylinder, Wärtsilä RT-flex96C low speed diesel engine, which produces a maximum power output of 80,080kW at 102rpm. The vessels are capable of sailing at a speed of 25.1kts.

The TI-Class of ships comprising of TI Africa, TI Asia, TI Europe and TI Oceania are the fourth longest in the world. The vessels are 380m long, 69m wide and 34m deep. The draught of the vessels is 24.5m.

The double-hulled supertankers were originally constructed by DSME in Okpo, South Korea, for their former owner Hellespont Shipping in 2001. TI Oceania and TI Africa are now owned by Overseas Shipholding Group (OSG), while TI Asia and TI Europe are owned by Euronav.

TI Asia and TI Africa were converted into floating storage and offloading vessels (FSOs) in 2010. The two FSOs operate at Al Shaheen oil field offshore of Qatar. The supertanker vessels feature a HSD-Sulzer 9RTA84T-D engine which delivers 37,449kW at 76 rpm. They sail at a speed of 16.5kts.

Gudrun Maersk container ship, with a length of 367m, is the fifth longest ship in the world. It was built at Odense Steel Shipyard in Denmark and named in May 2005. Maersk Line owns the vessel.

The ship is powered by a Wärtsilä 12RT-flex96c diesel engine with a power output of 69,350kW at 102 rpm. It is equipped with a gas heat recovery system supplied by Siemens. The sailing speed of the vessel is 24.6kts.

MSC Beatrice container ship, with an overall length of 366.1m, is the sixth longest ship in the world. The lengths of its sister vessels MSC Daniela, MSC Danit, MSC Camille vary from 365.50m to 366m.

Beatrice has a width of 50.9m, draught of 15m and maximum container capacity of 13,798 TEU. It was constructed by Samsung Shipbuilding & Heavy industries, South Korea, in 2009. Mediterranean Shipping Company of Switzerland owns and operates the vessel.

Valemax Ships are a fleet of Very Large Ore Carriers (VLOCs) measuring 360m to 362m long. The first vessel in the series, MS Vale Brasil, with a length of 362m was commissioned in May 2011.

The Oasis Class cruise ships, ranked as the eighth longest in the world, currently comprise of two ships – Oasis of the Seas and Allure of the Seas. The two ships have a length of 362m and width of 65m. The third ship in the series is currently under construction and is set to be delivered in 2016.

The ships are owned by Royal Caribbean International. They were constructed in the Aker Yards at Turku, Finland, by STX Europe. The third vessel is being constructed by STX France in Saint-Nazaire.

The vessels in the series are capable of cruising at a speed of 22kt. They are powered by eight Wärtsilä V12 diesel engines generating a power of 12,871.23kW each. The main propulsion system consists of three 20MW azimuthing Asea Brown Boveri Azipods.

Axel Maersk container vessel, with a length of 352m, is the ninth longest ship in the world. It was commissioned in February 2003. A. P. Moller-Maersk Group is the operator.

The ship is 43m wide and carries cargo weighing up to 8,000 TEU. The order for the vessel was placed in 2002 and construction was carried out at Odense Steel Shipyard in Denmark.

The vessel is equipped with a 12-cylinder HSD-Wärtsilä Sulzer diesel engine, with a power output of 63,757kW at 100 rpm. It is also equipped with Wärtsilä Slow Steaming Upgrade Kits that enhance the vessel’s running capacity at continuous low load.

CMA CGM Madea is a container ship owned by CMA CGM. Its overall length of 349m makes it the tenth longest ship in the world. The vessel was built by Hyundai Heavy Industries in South Korea. It was delivered in December 2006.

The power plant of the ship includes a Man B&W 12K98MC diesel engine with an output of 68,640kW. Maximum sailing speed of the vessel is 25.40kts.