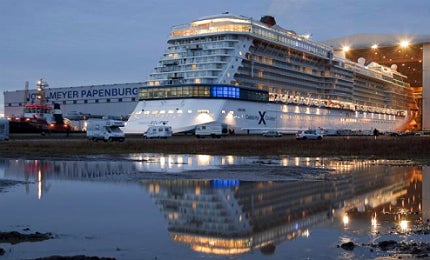 Europe’s shipyards have been weathering stormy seas for the last few years. The continent’s modern shipbuilding industry boasts advanced vessel construction and engineering capabilities that are rarely matched, but two prominent threats have put the industry in jeopardy and pushed many shipyards to the brink of closure.

The first of these threats has been sending ripples through the European shipbuilders for decades: major competition from South Korea, China and Japan, the world’s predominant shipbuilding bloc with a 70% combined market share of global production-value.

And, while the global recession continues to plague shipbuilders around the world due to the industry’s cyclical, market-dependent nature and its inflexibility of capacity, it has had a particularly striking effect on the EU’s maritime industry, which had fewer long-term orders than its Asian competition to fall back on after the recession hit and new orders plummeted. During the European shipbuilding industry’s annus horribilis of 2009, just one new order came through, compared to 21 in 2006.

In response to these challenges, and in the wake of the closure of major shipyards, such as Maersk’s Odense Steel Shipyard in Denmark at the cost of nearly a thousand redundancies, Europe’s shipyards are looking for ways to secure stability and growth for the future. Despite their troubles, Europe’s 300 shipyards provide employment for more than 500,000 workers, generating average revenues of about €30-40bn a year, and the industry’s proponents argue that it is economically and socially vital to keep these employment centres afloat.

“Despite their troubles, Europe’s 300 shipyards provide employment for more than 500,000 workers.”

While EU shipyards might have been outmuscled by East Asia in orders for massive commercial ships, their expertise in advanced marine engineering has led them to seek out niche shipbuilding and marine service markets that haven’t been squeezed so tight by global overcapacity and the economic downturn.

A February 2012 Memorandum of Understanding (MoU) issued by Europe’s Conference of Peripheral Maritime Regions (CPMR), which represents 160 major marine manufacturing regions in 28 European nations, also emphasises the strategy of diversification and differentiation to ensure ‘blue growth’ on the continent. As well as petitioning the EU for credit lines and subsidies and making the case for collaborative R&D projects to develop marine technologies, the regions stressed the importance of identifying innovative growth markets and the reshuffling of the industry to meet this demand.

“European maritime regions and industries have launched ambitious actions to support the innovative diversification and differentiation of their shipyards towards new innovative and rising markets,” the MoU states. “Fresh investment to these emerging sectors is needed to give new life to the shipbuilding industry.”

The surprising resilience of the European cruise industry in the face of the economic downturn has been drawing some much-needed orders to European shipyards in recent years, and the market looks set to continue on its upward curve. The cruise industry’s contribution to the European economy increased from €35.2bn in 2010 to €36.7bn in 2011, with Europe and the Mediterranean consolidating their positions as top global cruise destinations.

“Collaborative R&D projects are a means of supporting innovation without getting mired in state subsidisation.”

This growth has primarily benefited European shipyards, which dominate the technically advanced cruise shipbuilding market. EU shipyards are set to build more than 24 new cruise vessels, worth a total of more than €12bn, between 2012 and 2016.

Major shipbuilders, including Germany’s MEYER WERFT and Italy’s Fincantieri, have emerged as dominant players in the cruise ship construction market.

Fincantieri has achieved a particularly strong roster of cruise ship orders during the last couple of years, with major orders secured from P&O Ferries for the UK’s largest cruise ship and another order, in the company’s long relationship with Costa Crociere, for the €550m flagship vessel Costa Diadema, due for completion in October 2014.

These large-scale orders can secure a shipyard’s prosperity for years to come. This fact wasn’t lost on STX Finland‘s Turku Shipyard director Jari Anttila when TUI Cruises ordered a second cruise vessel from the shipbuilder, with delivery of the two ships set for spring 2014 and spring 2015.

“This second vessel will guarantee employment until spring 2015,” Anttila said. “I’d say that this is a victory in terms of employment for the shipyard’s entire personnel and for those who have been engaged in active work in various tasks during this project.” The two orders will provide a total of 11,000 man-years of work to the shipyard.

While exploiting the growth of the cruise industry is a case of European shipbuilding succeeding in one of its strongest sectors, industry and governments are also pushing towards emerging markets that could help diversify shipbuilders’ operations as they branch out into new sectors.

The sustained growth of offshore wind farm development offers one such opportunity. Offshore wind farm installations in Europe increased by a third in 2012, with an average of more than one turbine installed every day. The European Wind Energy Association predicts that 2013 could bring a further 20% increase in installations.

As the offshore wind industry gathers momentum, struggling shipyards are looking to this new market as a way to develop a new specialism. This restructuring has been particularly noticeable in the UK, which leads Europe in offshore wind capacity. A number of UK shipyards, many of which have been virtually abandoned because of their inability to compete in the international shipbuilding market, have found a new lease of life by adapting to support offshore wind installation and maintenance operations.

“As the offshore wind industry gathers momentum, struggling shipyards see this new market as a way to develop a new specialism.”

The Falmouth docks complex has maintained a solid stream of work by supplementing its usual repair and conversion work with offshore wind support services. In 2011, the dockyards spent time supporting the Leviathan and Kraken jack-up vessels as they carried out turbine installation works for the Walney 2 offshore wind farm in the Irish Sea.

“The fact of the matter is it’s cheaper to build ships elsewhere, and while we still do a lot of repair and conversion work, we no longer have the capacity to build in the UK,” the Leviathan’s captain Tony Cato told The Engineer in 2011. “The government has already committed to putting millions back into various ports and into boosting the offshore renewables industry. There is no shipbuilding left in the UK, so that money should boost the manufacture of wind turbine structures in and around those ports.”

The UK Government signalled its intention to help shipyards and other marine infrastructure to make the transition to offshore wind services towards the end of 2011, when Chancellor George Osborne announced that it would create five Centres for Offshore Renewable Engineering (CORE) in maritime hubs, such as Humberside, Tyneside and Great Yarmouth. For a site like the Swan Hunter shipyard in Newcastle, which no longer builds ships, CORE status will offer tax breaks and a simplified planning process for setting up high-tech offshore manufacturing facilities.

With the International Maritime Organisation and the EU implementing increasingly stringent regulations to improve the environmental performance of global shipping, the development and manufacture of green technologies and vessels is another emerging industry sector that could favour specialised, technologically sophisticated European yards.

“An ambitious environment policy, especially regarding climate action and resource efficiency, can be a driving force for innovation and thus improve the market prospects for European yards,” reads the February 2012 CPMR memorandum.

“These policies can contribute to the development of new technologies that help reduce emissions and fuel consumption and make sure that European companies have a competitive advantage.”

A number of major collaborative projects are currently underway, some private and others under EU auspices, to encourage the kinds of technological and environmental innovation that could create new high-efficiency and eco-friendly niche markets for European shipbuilders.

The Breakthrough in European Ship and Shipbuilding Technologies (BESST), funded by the European Community under the seventh Framework Programme, has brought together a large group of shipyards (Fincantieri, STX Group, Meyer Werft, Damen Group and others), research organisations, universities and classification societies, to provide a holistic approach to ship design and construction, emphasising sustainability and efficiency to reduce overall life-cycle costs.

From the industry’s perspective, the rationale behind the project is to make a case for slightly higher upfront shipbuilding costs – most European shipyards struggle to compete with international rivals on price – by offering onboard design and technologies that can recoup those costs. BESST, which has been focusing on deck space management and improved payload, energy efficiency, passenger comfort and safety, has been ongoing since 2009 and is now approaching its 2013 end-point, with project organisers reporting that “the result of the project exceeds the initial objectives”. 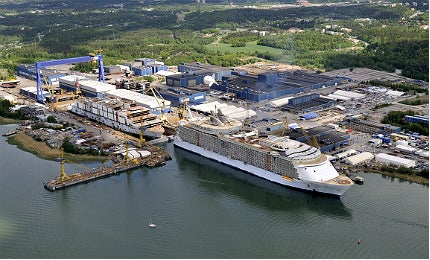 Other schemes have been springing up to improve ship efficiency and environmental performance, including the Fuel Cells for Low Emission Ships (FellowSHIP) project to develop a hybrid fuel vessel and a collaboration between Det Norske Veritas and Process Systems Enterprise to work on fitting carbon capture and storage facilities on to ships. These projects are helping to pave the way towards European-built ships that set themselves apart from the competition, such as STX Finland’s LNG-powered M/S Viking Grace cruise ferry, reported to be the world’s most eco-friendly large cruise ship, which was delivered to Viking Line in January 2013.

Collaborative R&D projects, whether funded by private or state sources, are an essential means of supporting industry innovation without getting mired in the treacherous waters of state subsidisation.

As CPMR working group leader and first vice-president of the Pays de la Loire Regional Council, Christophe Clergeau, said in a December 2012 interview: “It is not a question of subsidizing, but providing support for industrial differentiation and diversification strategies… High growth markets, such as that of marine renewable energies, are characterised by significant need for investment in R&D and in innovation – it is primordial. In addition, a network of the actors of the sector should be created. Co-development platforms are powerful instruments for competitiveness.”

The last few years might have brought their fair share of bleak projections for Europe’s shipyards, but pinpricks of optimism are now starting to shine through the industry’s grey skies. With a focus on playing to its high-tech strengths and identifying new areas for sustainable growth, the European shipbuilding sector stands a good chance of carving out a space it can confidently call its own.

The cruise industry has proven itself to be incredibly lucrative, with weeks at sea a favoured holiday destination.