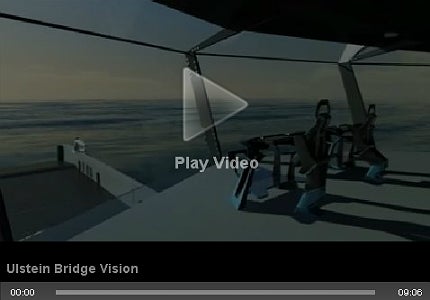 Like a scene from the movie Minority Report, infographics pop up on a semi-circular, gesture-controlled glass window pane that dominates the front of the bridge from floor to ceiling. Evoking futuristic Hollywood scenes, the ULSTEIN Bridge Vision uses clean, simplistic lines and minimal buttons at the centre of its design philosophy.

A collaboration of ideas and research between ship design company ULSTEIN, the Oslo School of Architecture and Design, Kwant Controls and The University of Aalesund, it’s clear the heart of the Bridge Vision’s design lies firmly in the future; or the future as we have been taught to imagine it.

The bridge’s technology may not extend to predicting when exactly trouble will happen, as in Minority Report, but instead the captain can conjure up information with the wave of a finger and it will display clearly on the expansive glass for all to see. It can then be dismissed with the shake of a hand. 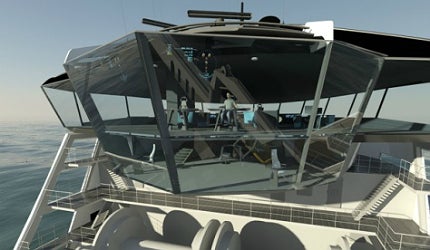 Assistant Professor at the Oslo School of Architecture and Design, who developed the Bridge Vision along with Kwant Controls and The University of Aalesund, Kjetil Nordby explains where their vision stemmed from: “The Bridge Vision is designed to inspire people’s imagination. As a result of this…We drew inspiration from popular media that form people’s sense of future, like concept cars, movies and games.”

“The captain can conjure up information with the wave of a finger and it will display clearly on the expansive glass for all to see.”

ULSTEIN have also said they were particularly inspired by the technology and graphics of computer games.

“The fundamental vision behind mobile OS development have [sic] been influential to our thinking. Android, WP8 and IOS have redefined the structure of everyday graphical user interfaces. Also, much can be learned about advanced control of real-time systems in the long range of game systems and titles on the market the last 15 years.”

Just like today’s smartphones, Nordby and his team, when designing the Bridge Vision, were particularly focused on ensuring everything can be personalised and easy to use.

Some of the Bridge Vision’s user-focused features include a system that automatically adapts to the individual user’s preferred setup, a chair design with multiple sitting positions that can also be collapsed for standing, and users are provided with all relevant details related to an operation in their line of vision, making it easier to operate the vessel. 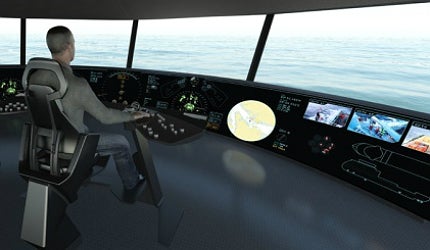 ULSTEIN and Nordby chose to keep the technology aspect of their design very close to their chest. For example, when asked how they created the glass window interface, he says simply that he can not discuss it.

“Nordby assures the Bridge Vision is as practical – if not more so – as any other ship.”

Other features, which ULSTEIN and Nodby are happy to publicise, are: a system that prioritises information based on the operation and system of the ship, where a real-time overlay is possible, and the fact that information on operationally critical tasks is provided by showing hidden elements due to fog, darkness or elements that are hidden behind objects.

The bridge can also be turned into a simulator for training protocol practice before a critical operation.

The uber-modern looks of ULSTEIN Bridge Vision’s design might make a ship captain question whether functionality gave way for image when designs were being drawn up. Nordby assures the Bridge Vision is as practical – if not more so – as any other ship.

“Many of the functions of the ULSTEIN Bridge Vision are quite similar to the ones found in existing ship bridges. Radars, DP and radios are also present in our systems. However, in the UBV all systems are shown in a unique unified interface that will make operating the systems much more safe and efficient.

“The research has been balanced between user research, design experiments, prototype development and lab building,” he says.

What does the future really hold?

“ULSTEIN Bridge Vision uses clean, simplistic lines and minimal buttons at the centre of its design.”

Unlike conventional ship-bridges, says Nordby, ULSTEIN deliver the entire front of the bridge rather than different components coming from different companies as he says is custom.

Plus, he adds, “all equipment may take advantage of advanced interface technologies” and thus “changes the way ships are developed, sold and maintained, essentially moving the ship bridge into the service economy”.

ULSTEIN have just completed the design phase, so, what’s next in the pipeline for their ship-bridge of the future?

Nordby’s simple reply is: “The path of Ulstein Bridge Vision from here on is to follow up on ULSTEIN’s own slogan, ‘Turning visions into reality’.”