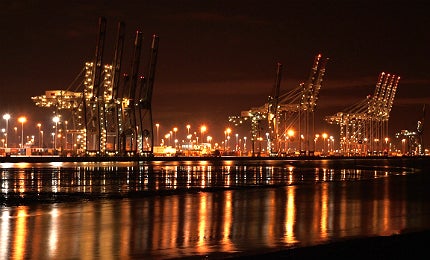 STX France started 2013 on a positive note, with a $1.3bn order from Royal Caribbean Cruises for the construction of a new Oasis-Class cruise ship.

The ship, to be built at STX’s Saint-Nazaire shipyard and due to be delivered in 2016, will join Royal Caribbean’s two other Oasis-Class cruise liners, Oasis of the Seas and Allure of the Seas.

STX’s contract includes an option to build another cruise ship; the option would have to be taken within the year and the ship would be scheduled for delivery in 2018.

The new 16-deck, 2,700-cabin ship is part of Royal Caribbean’s extensive programme of newbuild ship orders and vessel refurbishment; the company plans to invest between $700m and $1.3bn each year until the end of 2016.

DP World , which is carrying out the terminal 2 expansion, announced in January that it had completed the extension of the quay wall with the laying of the last of 2,752 65-ton blocks.

The expansion extends the wall from 400m to around 3,000m, allowing the terminal to accommodate six 15,000teu ships at the same time.

As the wind power market begins to pick up momentum and new offshore wind farms are installed around the world, demand is also rising for dedicated support vessels to carry out repair and maintenance work in remote and challenging marine environments.

UK-based shipbuilder Alicat Workboats is the latest beneficiary of this trend, having received an order from E.ON for the construction of four new wind farm support vessels.

The ships, which will be delivered from mid-2013 onwards, are set to be deployed to E.ON’s Robin Rigg Wind Farm off the Solway Firth in the UK.

Piracy has become a significant risk for vessels operating in particular hotspots, such as the east and west coasts of Africa and some south-east Asian regions.

But new statistics from the International Maritime Bureau (IMB), released in January, show that the piracy situation does seem to improving, supported by countermeasures like naval escorts, armed security guards and vigilant crew members.

IMB’s report revealed that there were 297 pirate attacks in 2012, a significant drop from the 439 attacks that took place in 2011. IMB director Captain Pottengal Mukundan welcomed the positive statistics, but warned that crews need to remain extremely vigilant, as attacks are still a regular occurrence in some waters.

The vessels, which will incorporate Seaspan’s fuel-efficient SAVER design, are scheduled to be delivered in 2014.

Upon delivery they will be chartered to Mitsui OSK Lines (MOL). As part of the charter deal, Seaspan will also buy four 4,600teu second-hand container ships from MOL.

On top of these orders, Seaspan placed a $600m order earlier in January with Hyundai Heavy Industries (HHI) for five ultra-large container ships, each of which will be able to carry 14,000teu of cargo.

As part of that project, ABP awarded a dredging contract to Boskalis Westminster to remove 450,000m³ of material from the port’s navigation channel, widening it to improve accessibility and manoeuvrability for the larger container vessels that are expected after the project’s completion.

Boskalis ‘s dredger ‘Manu Pekka’ is carrying out the dredging work, and the dredged material will be transported to the licensed disposal site off the Isle of Wight by four barges from Malmo, Sweden.

The Submarine Market in the United Kingdom to 2024: Market Brief