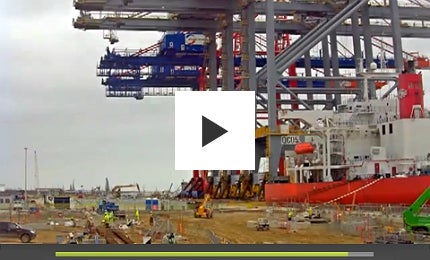 At the end of February 2013, three behemoths sailed into the UK’s Thames Estuary after a two-month voyage from the other side of the world. They eventually came to rest at London Gateway, DP World’s mega-port and logistics park currently being constructed in Thurrock, Essex. The giants in question are the colossal new cranes that have just been delivered to London Gateway from China by Shanghai Zhenhua Heavy Industries Company, which also built the huge structures.

“These mechanical monsters will be able to simultaneously lift four containers.”

“These cranes will bring new innovation and efficiency to the supply chain industry,” Moore continued. “It won’t be long before importers and exporters across the country will be able to cut costs dramatically from their supply chains by choosing London Gateway, a port which is much closer to where goods need to go. A world-class deep-sea container port requires a world-class set of cranes. They will be the lynchpin of the operation – the biggest, most modern and most efficient the UK has ever seen.”

“The park will provide some 860,000m² of cargo accommodation for distribution companies.”

But the company’s biggest job was to supervise and co-ordinate the incredibly complex process of bringing the Zhen Hua 26 into position at the berth and discharging the cranes. The cranes were far too large and heavy for another crane to be capable of lifting them, so project engineers got the cranes onto the dock using a system of pulleys, weights and rollers that harks back to ancient Egyptian engineering techniques.

“It will take us a whole week to unload them,” DP World spokesman Tom Conroy told the Lloyd’s Loading List at the time. “You could say we are using the most ancient techniques to accommodate the most modern, robotic technology.”

“Engineers got the cranes onto the dock using a system that harks back to ancient Egyptian engineering.”

DP World is sparing no expense to ensure that the port becomes the UK’s primary modern deep sea container facility, after gaining ownership of the London Gateway plan as part of its £3.92bn acquisition of P&O in 2006. The marine terminal operator is investing around £1.5bn into the development of the port and associated facilities, and sees London Gateway as a container hub that will remain globally competitive and technologically state-of-the-art for the foreseeable future.

The port itself will feature the aforementioned quay wall, with 24 cranes and six berths. The shipping channel has been dredged from 11m to 14.5m in the inner channel, with the outer channel dredged to 16m. The berth pockets have also been deepened to 17m, allowing the port to accommodate the world’s largest container ships. Much of the dredged material has been reused, to create new land on which to build the terminal.

The port will also be integrated with Europe’s largest logistics park, a move that is intended to improve efficiency and give cargo companies better access to the lucrative consumer market of London and the south-east of England. The park will provide some 860,000m² of cargo accommodation for distribution companies, and DP World is working on upgrading the site’s transport connections. Millions of pounds are being poured into local roads like the A13 and the M25 motorway, and with 20km of new track under construction to improve the site’s rail freight connections, up to 30% of the cargo rolling out from the park should be on rails rather than wheels.