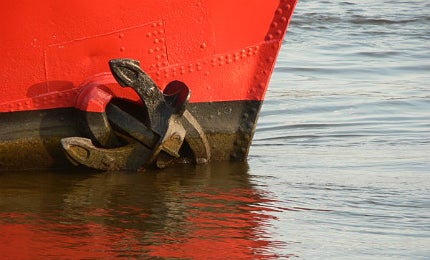 Duke University engineers have developed a polymer that can prevent fouling on ships’ hulls by twitching, creasing and wrinkling, much like a living organism. Unlike traditional anti-fouling paints, this innovative, paint-like material can dislodge the bacteria that causes hull fouling without the help of any toxic chemicals, meaning that it not only makes business sense for ship owners, it also has significant environmental benefits.

Fouling: one of the industry’s most persistent problems

“This innovative, paint-like material can dislodge the bacteria that causes hull fouling without the help of any toxic chemicals.”

Fouling has always been a huge issue for the ship industry. Marine species are not shy about colonising solid surfaces, so, as soon as a ship enters active service, it is already fighting a losing battle against the seaweed, barnacles, molluscs and algae clamouring to take up residence on its hull. In fact, vessel bottoms that are not protected by anti-fouling systems can gather up to 150kg of marine life per square metre in less than six months of being at sea.

Not only can this slow ships down, it also reduces fuel efficiency as vessels need to burn more fuel to drag along their unwanted cargo. Indeed, just a small amount of fouling can lead to an increase in fuel consumption of up to 40%, while the loss of speed caused by moderate levels of fouling has been estimated at ten to 18%.

“In addition, the decrease in fuel efficiency further increases carbon footprint and greenhouse gas emissions,” said engineer Xuanhe Zhao, the brains behind the new anti-fouling polymer under development at Duke University. “Biofouling also affects other devices immersed under water, such as sensors and energy harvesters.”

All of this adds up to severe economic consequences for ship owners. In fact, a report compiled in 2011 by Dr Michael P Schultz, programme director of ocean engineering at the US Naval Academy in Annapolis, MD, found that the costs associated with the drag from ship hull fouling added up to around $56m per year for the entire DDG-51 destroyer class, or $1bn over 15 years.

Anti-fouling paints come with their own set of problems

Of course, the industry has already developed solutions – principally anti-fouling paints – to the problem of bacteria build-up on ships hulls. However, while anti-fouling agents are effective at killing the offending organisms, they also come with their own set of issues.

“Existing anti-bacteria paints are generally toxic and therefore have adverse effects on the environment,” Zhao explained. “For example, the most commonly used anti-fouling agent tributyltin moiety (TBT) has been shown to cause harm to many marine organisms, specifically oysters and molluscs.”

TBT, in fact, has been banned in many countries and replaced with copper-based anti-fouling agents. But copper, too, is coming under increasing scrutiny from regulators, with the state of Washington in the US becoming the first state to ban the use of copper-based bottom paints for recreational boats because of their detrimental impact on the environment, effective from 2018.

The hunt, therefore, is very much on for alternatives, and researchers at Duke University might just have the ticket.

Engineer Xuanhe Zhao and his colleagues have developed an active polymer coating that can dislodge unwanted bacteria without the use of any harmful chemicals – instead, it ‘wrinkles’ at a microscopic level, pushing the bacteria off the ship’s hull.

“While anti-fouling agents are effective at killing the offending organisms, they also come with their own set of issues.”

“Under external stimuli, such as electric voltage or air pressure, the active polymer coating can deform, forming patterns such as wrinkles, creases and craters,” Zhao explained. The deformation and patterning then actively detach biofilm that has accumulated on the ship’s surface.

This can then help prevent a bigger series of events that can reduce a ship’s performance and efficiency. Indeed, without biofilm, which acts as food for the larvae of larger animals, the chances of large-scale fouling from organisms such as barnacles are much slimmer.

Ironically, the inspiration for this innovative approach came from the very organisms that cause the problem in the first place. “We were inspired by the fact that an enormous number of biological surfaces can effectively clean themselves via active deformation and motion,” Zhao remarked.

“For example, tiny hairs called cilia on the surfaces of respiratory tracts constantly move back and forth, pushing inhaled foreign particles out of our lungs. Ciliary cleaning has also been widely used by molluscs, corals and many other marine organisms for active anti-fouling.”

In the lab: intensive investigation

“Engineer Xuanhe Zhao and his colleagues have developed an active polymer coating that can dislodge unwanted bacteria.”

The approach has now been tested in the laboratory with simulated seawater, as well as on barnacles, and further investigation is currently underway.

“The new mechanism of active anti-fouling is under intensive investigation in our group and other research groups,” Zhao confirmed, adding that there is still a lot of work to be done.

“We still need to improve the long-term reliability of the active coating and reduce its cost,” he admitted. “We also do not know how long the new coating will last in applications, but we are actively testing this now.”

The hope is that cost will not be a factor that holds back the commercialisation of this promising product in the long term. “The materials that constitute the new coating are relatively low cost,” Zhao emphasised. “So we hope the new coating could be economically competitive in future applications through its simple fabrication process.”

Could this be the answer the industry has been looking for?

Even at this early stage in its development, Duke University’s nature-inspired active coating has piqued the interest of the ship industry. “We have received inquiries from multiple private ship owners,” Zhao confirmed.

It’s not difficult to see why. The business case behind hull cleaning is clear, but the coating developed at Duke University makes obvious environmental sense too. In an industry with increasingly stringent environmental regulations, low-cost, non-toxic coatings could be the answer ship owners have been looking for.

Onboard carbon capture: dream or reality?

A recent project by DNV has theoretically proven the feasibility of ship-based carbon capture and storage.