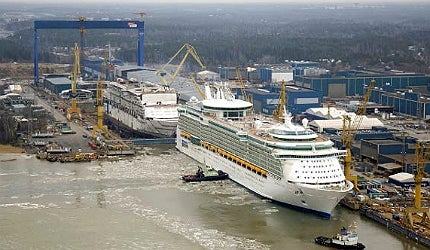 The new terminal, expected to have a quay length of 330m and an annual capacity of 800,000teu, will complement the port’s existing container operations upon its scheduled completion in 2015.

DP World will invest around $200m to build the new terminal and its four rail-mounted quay cranes and 12 rubber-tyred gantry cranes, which it will then operate for a 17-year concession period.

The contract follows JNPT’s selection of Royal Boskalis Westminster in August 2012 to deepen and widen Nhava Sheva’s port and access channel to allow the accommodation of large 6,000teu vessels during all states of tide.

The Saudi Arabian Government is well-known for its extravagant investment in infrastructure, and in November it turned its attention to the country’s ports.

“The investment is partially a response to strong growth in the country’s container operations.”

As part of a $914m investment plan, Saudi Arabia will be pumping around $750m into King Abdul Aziz Port in Dammam, with $535m earmarked for expanding the port’s container capacity and $213m set aside for upgrading other port facilities.

The Saudi Ports Authority is also planning to invest $164m to build a new power plant to increase power generation capacity at King Abdul Aziz Port from 50MW to 120MW, as well as new container terminals at Dhiba Port and King Fahd Industrial Port in Jubail.

The investment is partially a response to strong growth in the country’s container operations, which accounted for 20% of regional throughput in 2011.

The Port of Lazaro Cardenas’s $900m Terminal 2 (TEC2) project kicked off in November with the start of construction by APM Terminals.

“After all three phases are complete, the terminal will have a total throughput capacity of 4.1 million teu.”

TEC2 will be built in three phases, with the first phase scheduled to start operations in Q1 2015 with an annual capacity of 1.2 million teu. First-phase construction includes a 43-hectare container yard and a 650m quay with seven super post-panamax ship-to-shore (STS) gantry cranes, able to reach across 23 rows of containers.

APM Terminals said it was building the new terminal with a focus on safety and sustainability; the facility’s equipment will be energy-efficient to reduce emissions.

After all three phases are complete, the terminal will have a total throughput capacity of 4.1 million teu, supported by 16 STS cranes.

General unrest in Europe over widespread economic austerity measures have taken their toll on port operations across the continent.

Protests and strikes called by the European Trade Union Confederation (ETUC) have caused disruption at container terminals, depots and ports, with many vessels forced to alter their ports of call to avoid the trouble.

A prominent vessel affected by the strikes was Royal Caribbean’s cruise liner Independence of the Seas, which avoided a call at Lisbon, opting instead to dock at Lanzarote in Spain.

The strikes have been particularly widespread in southern Europe, with major operations halted or disrupted in Portugal, Spain and Greece.

Port operations across the whole of Greece ground to a halt for a three-hour strike on 14 November, while the Spanish and Portuguese container terminals of Lisbon, Aveiro Valencia and Algeciras were temporarily closed.

There was trouble for the Zhoushan Jinhaiwan shipyard in China last month, as Danish client Ultrabulk cancelled an order for two Kamsarmax bulkers, instead placing a new order for an ECO-type bulker from an unnamed Japanese shipyard.

“The termination of the contract means that Ultrabulk’s 12-year charter agreement for the two vessels has also been cancelled.”

The contract with the Chinese shipyard was cancelled after it failed to complete construction of the vessels with the predetermined timeline.

The termination of the contract means that Ultrabulk’s 12-year charter agreement for the two vessels has also been cancelled.

The charter agreement has now been transferred to Ultrabulk’s newly ordered ECO-designed Supramax bulker, which will have a capacity of 61,000dwt and will include features to improve fuel efficiency and reduce CO2 emissions. The vessel is scheduled for delivery in 2015.

Plans for a massive Greenfield port project and Free Trade Zone have been announced in Lagos State, Nigeria.

APM Terminals, already busy with its Lazaro Cardenas terminal project in Mexico, will lead a consortium to build a full-service deepwater port in Badagry with a seven-kilometre quay and 1,000 hectares of dedicated yard space.

The mega-port is intended to address concerns about Nigeria’s port capacity, which will reportedly be outstripped by container volumes by 2017.

Russia has been rapidly developing its icebreaker capabilities to forge new trade paths through the Northern Sea Route, which is now more accessible because of Arctic melting.

Now the Ob River, an LNG carrier chartered by Dynagas to Russian energy company Gazprom Marketing & Trading, is set to become the first ship to sail across the Arctic Ocean during the winter months.

Ob River, which left Norway on 7 November on its way to Japan, is being accompanied by a Russian nuclear-powered icebreaker.

The ship is due to reach Japan in early December, shaving 20 days off the standard journey and using 40% less fuel.

October’s industry news was dominated by a deadly ferry collision in Hong Kong at the beginning of the month, as well as the kidnapping of seven crew members off the Nigerian coast, now thankfully freed.