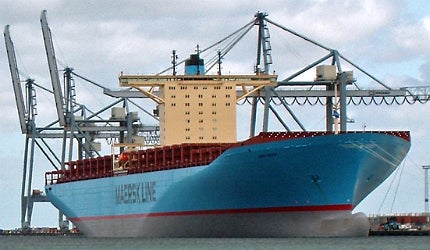 As countries run low on their own natural resources and consumer goods, they are becoming increasingly dependent on a reliable shipping industry for global trade.

In light of this, rapid innovation in marine propulsion during the last few years has resulted in the development of new engines that are designed to be more powerful and energy-efficient.

The world’s largest and most powerful diesel engine was built with this in mind – to propel a new generation of larger tankers with a capacity to hold more cargo.

Nuclear-powered icebreakers have also been designed in recent years to help oil companies traverse the frozen waters of the Arctic, and aid Russia in boosting international trade.

In terms of energy efficient designs, the shipping industry has started to look seriously at ways to reduce fossil fuel consumption by building electric motors, which have been used on watercraft from submarines to research vessels.

The trend towards using renewable and alternative energy sources to fuel engines has also gained momentum over the last few years as countries look towards cutting down on pollution in the maritime sector.

Speaking at the Euronaval exhibition and conference in Paris in October, he explained that maritime operations require ships which are operationally dependable, financially efficient and respect the environment.

Under these circumstances, electrical propulsion is worthy of further investigation based not only on fuel and maintenance costs but also on the consequential impact on improvements in ship availability, Dannat said.

“Nuclear-powered icebreakers have also been designed in recent years to help oil companies traverse the frozen waters of the Arctic.”

In a draft legislation approved in September 2012, the commission states that under a business-as-usual scenario, the emissions of the maritime sector will surpass emissions from all land-based sources, reinforcing the need for greener propulsion systems.

But it’s not just the navy that’s benefiting from electrified propulsion; Norway’s Sustainable Electric Propulsion Systems (STADT) has designed a hybrid electric converter for use in seismic research vessels, including Det Norske Veritas’s MS “Sanco Spirit” and various other ships.

The Stascho electric propulsion system is available in models from 100kW to 100MW and supplies sinusoidal voltage and current to the electric motor and back to the main switchboard. This ensures that there is no interference from inverter drives on other sensitive electronic equipment on the ships.

“The shipping industry has started to look seriously at ways to reduce fossil fuel consumption by building electric motors.”

The engine will be used in conjunction with B9’s dyna-rig sail propulsion system, a free standing and free rotating system which comprises of multiple small sails that operate electronically.

The system is set to provide around 60% of the fossil fuel-free vessels’ thrust, with the remainder coming from Rolls Royce’s engine.

Some vessels are also incorporating propulsion systems powered by algal oils. In January 2012, giant cargo boats and US Navy warships were successfully powered by oil derived from genetically modified algae as part of its initiative to cut its fossil oil use by 50% by 2020.

Nuclear power for propulsion is also able to reduce carbon emissions in the shipping industry, but its other operating characteristics are even more appealing to vessel designers.

Nuclear fuel is energy-efficient – a small amount of the resource can provide energy equivalent to millions of times its weight in coal or oil. Secondly, it is possible to build a reactor which will operate a vessel for several years without refuelling.

What’s more, a nuclear propulsion plant allows more space for cargo because the need for large fuel bunkers is eliminated. It also allows a vessel to operate at higher speeds without refuelling.

Nuclear propulsion has proven particularly beneficial to icebreakers built by Russia for the exploration of frozen waterways in the Arctic.

These icebreakers are more powerful than their diesel-powered counterparts and can force their way through thick ice at speeds of up to ten knots.

More broadly, there is a growing trend for the development of uber-powerful engines in the shipping industry as a new generation of supertankers and container ships begin to set sail.

And even as ships move towards an all-electric model, the demand for diesel is still high.

The Wärtsilä RT-flex96C diesel engine is currently the largest and most powerful engine in the world. Standing at 13.5 metres high and weighing 2,300 tonnes, the two-stroke turbocharged engine comes in six cylinder in-line through to a 14 cylinder versions.

The RTA96C-14 can achieve a maximum power output of 108,920 horsepower at 102 revolutions a minute, while peak capabilities of the 14-cylinder version can exceed 80MW.

Although the RT-flex96C runs on diesel, Finnish manufacturer Wärtsilä kept energy efficiency in mind when building this engineering feat.

The design is based on the older RTA96C engine, but modern fuel injection systems have been replaced with the traditional camshaft, chain gear and fuel pumps. As a result, 50% of the energy in the fuel is converted to motion.

Technological and structural advances are pushing boundaries in ocean-going efficiency, productivity and precision.

Atomflot’s expanding nuclear icebreaker fleet brings with it a number of industrial and geopolitical implications, including a possible boost for Russia’s coal exports.