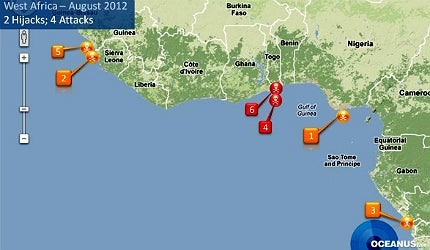 This month’s piracy report covers piracy-related activity across the world’s most dangerous waters, as well as the best efforts to stop such incidences from occurring, compiling data from both August and September 2012.

Ten new patrol gunboats have been inaugurated at Nigeria’s Defence headquarters in an effort to boost the operations of the Joint Task Force (JTF) in the Niger Delta, with Gov Chibuike Amaechi claiming they will help relieve operational problems faced by the JTF in combating piracy.

“As you are aware, our beloved country is facing multiple security challenges, particularly in the maritime environment. These internal security problems include piracy, smuggling of small arms and light weapons, kidnapping and illegal oil bunkering,” added Amaechi, before explaining that it was the government’s desire to bring the situation to an end as quickly as possible.

Ghana has echoed Nigeria’s anti-piracy efforts, with President John Dramani Mahama stating that the nation’s new naval patrol vessels will be used to prevent cases of piracy in the Gulf of Guinea.

The trial of ten Somali pirates in Hamburg, Germany, attracted international attention, with many viewing Germany’s intent to bring pirates to justice as a victory against lawlessness on the high seas. Although sea piracy falls under universal jurisdiction, few Western countries have attempted to prosecute captured pirates; however Germany has attempted to send out a message, by bringing charges against those responsible for the hijacking of German freighter cargo ship MV Taipain in April 2010.

The case has, however, attracted criticism from some who deem it to be a “pointless and expensive circus”, claiming that efforts would be better placed in combating piracy where it actually occurs.

Military personnel are among thousands of private security guards hired to protect commercial shipping from attacks by Somali pirates in the Indian Ocean. SMH.com cites Lowy Institute military analyst James Brown as stating that as many as 2,700 armed guards are currently operating onboard merchant ships, which are travelling on trade routes in the Indian Ocean.

“The move towards private security could be blamed upon a lack of maritime security strategy in the region.”

These have been joined by some nations branching into the private security business, hiring out small elements of navies to escort commercial vessels travelling through dangerous straits.

Research compiled by Oceanus reveals that more than 140 companies now provide armed protection for ships in the Indian Ocean, with up to 40 privately-owned armed boats offering escort services to merchant ships in areas at high risk of piracy.

The move towards private security could be blamed upon a lack of maritime security strategy in the region, which Gemini Maritime managing director Alain Schembri says is having a significant influence across the region, where maritime criminal activity is on the rise.

Despite the end of the monsoon season, Somali pirate activity is expected to remain low, as aggressive navy action and privately armed security teams continue to keep pressure on active pirate factions. The first half of 2012 saw 69 recorded incidents involving Somali pirates, significantly lower than the 163 recorded in the same period in 2011.

Nato Staff Operations deputy chief commodore Bruce Belliveau said; “We are expecting the activity rate to be lower than last year at this time… that is based on the lack of activity in the past six months.

“We are not seeing the build up of logistic supplies that they would have had in the past for outfitting fishing vessels or dhows to use as motherships,” Belliveau told Reuters while attending a shipping conference.

“Why is China becoming increasingly cooperative in counter-piracy operations?”

Elsewhere, The People’s Liberation Army Navy (Plan) has maintained a counter-piracy presence in the Indian Ocean for four years, which begs the question: why is China becoming increasingly cooperative in counter-piracy operations?

The PLAN counter-piracy deployment is a fascinating component of the wider China debate, as it represents the first time that Chinese vessels have conducted a ‘far-seas’ operation to protect Chinese interests since the fifteenth century. Even more remarkable is the fact that the typically isolationist and paranoid Chinese Communist Party (CCP) is now openly cooperating with a variety of traditional foes in the area of counter-piracy; states such as India, Japan and the US are now closely communicating and operating in conjunction with their PLAN counterparts in the Indian Ocean.

Four Koreans are still being held in Somalia, having been held captive for more than 500 days in what is now the longest detention by pirates on record. They were taken hostage aboard the MT Gemini on 30 April 2011 and taken deep into the interior of Somalia.

The ship’s owner paid a ransom on 30 November, and the pirates were initially supposed to leave the ship within 24 hours after they got the ransom, which was dropped from a helicopter, while leaving the crew behind. But in the early hours, when multinational naval forces relaxed their supervision, the pirates took the Koreans again.

They then demanded compensation for the eight pirates who were killed in the rescue of a Korean freighter in the Gulf of Aden in January 2011, and the release of those captured during the operation. But the suspicion is that they simply want more money.