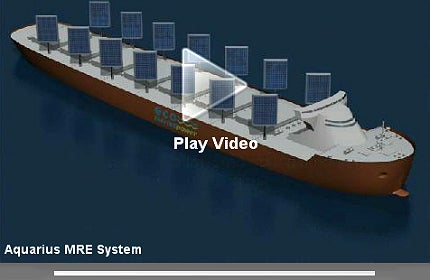 With accountability for emissions and environmental performance becoming an ever-greater priority for the shipping industry and the International Maritime Organisation (IMO), the last decade has brought with it a notable upswing in eco-friendly marine propulsion and power systems.

“EMP believes its system will offer fuel savings of 10-20% on large vessels.”

This rapid development in eco-friendly innovation includes the rise of dual-fuel technology, further exploration of alternative fuels such as liquefied natural gas, hydrogen and biofuel, as well as advances like frequency-controlled propulsion motors.

Aquarius MRE system – how does it work?

The Aquarius MRE system’s rigid solar sails (called EnergySails) are controlled automatically when a vessel is at sea or in port, with the energy collected and stored in the system’s storage modules (developed by Corvus) initially intended to be used to power ships when they are at anchor, reducing or even eliminating the emissions and fuel involved in running auxiliary generators. “Or it could be used to move smaller hybrid-electric vessels at low speeds or used for auxiliary services, such as lighting and ventilation,” EMP’s director Greg Atkinson tells us.

“EMP is intending to develop a showcase of Aquarius’s potential in the form of the Aquarius Eco Ship.”

As for the environmental and cost benefits, EMP believes its system will offer fuel savings of 10-20% on large vessels, depending on how well Aquarius MRE is integrated with ships’ power systems.

“The system would work better on ships with electric propulsion or a modern power management system whereby the energy storage modules and solar panels (and wind power devices if fitted) could form part of the ships overall power system,” explains Atkinson. “Also, to monitor and fine tune the performance of the system, we would include the KEI 3240 Data Logger.”

EMP is intending to develop its own showcase of the Aquarius MRE system’s potential in the form of the Aquarius Eco Ship concept design, which incorporates a host of energy-saving systems and design elements on a large oceangoing ship. If adopters followed this design, says Atkinson, fuel savings could be boosted significantly.

“For the Aquarius Eco Ship we believe a suite of technologies would work best,” he says. “This suite would include, for example, our Aquarius MRE System, advanced power management, air lubrication, electrical propulsion and optimised hull design. Together this combination could deliver fuel savings of 40% or more.”

“We will develop variations of the system suitable for a range of vessels such as naval ships, OSVs and even coastal ferries.”

EMP started testing components of the Aquarius MRE system in mid-2012, and moving into 2013, the company intends to ramp up its testing to the full system, including energy storage modules and solar panels. For the purpose, EMP has co-developed the ‘Aquarius Lab’ in Osaka, Japan.

“The lab has the equipment and space for us to test a complete prototype indoors, using simulated and real data, plus an outdoor area where we can also mount the prototype or other equipment,” Atkinson says.

The system has initially been designed for large ships such as bulk carriers or oil tankers, but EMP is looking into making Aquarius viable for a wider range of vessels. “We will develop variations of the system suitable for a wide range of vessels such as naval ships, offshore support vessels and even coastal ferries,” says Atkinson of the company’s future plans. “We also have a project ongoing that is looking at using the Aquarius MRE System for unmanned surface vessels [USVs] and a smaller version which could be used for large fishing vessels and small passenger ferries.”

In the meantime, EMP’s testing will push towards full sea trials in late 2013, with a targeted commercial launch by 2015. “Our primary focus is on safety, so we intend to conduct exhaustive tests both in the lab and at sea before we commercialise the system,” Atkinson says. “We may, however, bring the EnergySail into the market as a standalone subsystem earlier than this, since several shipping firms have already expressed an interest in this technology.”