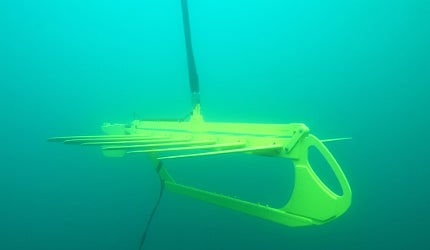 Speaking at the TedX San Francisco Big Blue Event in April, Ed Lu, chief of innovative applications at Liquid Robotics, told a packed venue: “You manage what you measure. If you don’t know what’s going on out in the oceans, how can you manage it? The ocean is critically important…most of our transport happens on it, it’s the source of most of our oxygen and it’s where most of our CO2 goes. There are huge swathes of the ocean that have absolutely no coverage.”

It is this desire to ‘connect the dots’ between sparsely located buoys and other costly oceanic sensors which inspired the company to build the Wave Glider, the world’s first wave-powered marine robot.

Requiring no fossil fuels for propulsion across the surface of the water, it transforms wave energy into forward propulsion and thrust, while solar energy powers its onboard communications, computing and sensor payloads. Using this platform, the creators argue, it’s potential for shipping and marine management is endless.

“Requiring no fossil fuels for propulsion across the surface of the water, it transforms wave energy into forward propulsion.”

The Wave Glider consists of a floating surfboard-type platform covered in a customisable sensor array powered by solar panels and a configuration of hinged, moveable flaps (the ‘Glider’). Tethered 20 feet below the surface, this weighted glider converts up and down wave motion into forward thrust via changing flap positions.

Its creators believe that the Wave Glider provides a host of benefits in comparison to traditional marine monitoring methods. According to VP for marketing and strategic planning David Bailard: “The Wave Glider is an autonomous marine vehicle that can stay out at sea for as long as a year at a time without the need for fuel, personnel or maintenance.

“Not only does this translate into dramatic cost savings from an operational standpoint, but it opens up a wide range of data collection capabilities that were previously considered too dangerous and / or expensive to pursue.”

Wave Gliders represent an ideal opportunity for companies looking to optimise their shipping routes in relation to changing conditions at sea. “View the Wave Gliders as the advance team providing real time reports and alerts on weather conditions in advance of the ship,” Bailard stated. “Knowing in real time the changes occurring on the surface of the ocean, as opposed to satellite data or ‘spotty’ buoy information would be extremely valuable for extreme weather avoidance,” he asserted.

“Its creators believe that the Wave Glider provides a host of benefits in comparison to traditional marine monitoring methods.”

According to the American Institute of Marine Underwriters, approximately 10,000 shipping containers are lost at sea every year, often with some associated damage to the vessels and largely due to severe wind and wave conditions. As Bailard related: “The Marine Policy Center at Woods Hole Oceanographic Institution predicts that more than half of this loss could be avoided by providing captains with the kind of real time ‘Nowcast’ data that Wave Gliders can supply today.”

Severe weather conditions, Bailard continued, cause more than $500m worth of damage and loss to vessels and cargo each year. “Deployed across oceans and shipping routes, Wave Gliders can provide real time information on weather, currents and waves to help ships avoid these conditions,” he pointed out. “In addition to this, companies can enjoy significant fuel savings by avoiding rough sea conditions and strong currents.”

While deep sea buoys can measure ocean currents, they are often separated by well in excess of 1,000km due to the heavy costs involved. “Denser and more timely current observations from Wave Gliders could improve vessel routing and trim some of the 400m metric tons of bunker fuel consumed by ships annually, at a cost of $280bn,” Bailard predicted.

Bailard believes that the existing METOC (Meteorology and Oceanography) configurations of the Wave Glider – designed to measure weather and currents – have the broadest applicability to the shipping industry, but this is merely the base for potential shipping applications.

Another way in which Wave Gliders could benefit shipping companies is in the communications sector. Satellite communication links have revolutionised the management of ships and the connectivity for vessels and crew during long ocean transits, while cellular telephone services have been extended offshore in a few areas of heavy traffic and development, such as the Gulf of Mexico.

“The existing Gateway model is designed for linking between a satellite and acoustic communications to undersea vehicles or sensors,” he added, adding: “The shipping industry would require a specialised vehicle with a raised antenna for RF or cellular communications.”

Robust design to handle a hurricane

“One of the company’s flagship Gliders, G2, not only survived Hurricane Isaac in August, but was able to transmit groundbreaking data.”

Ocean conditions can be extremely harsh and unforgiving, so how can an autonomous robot be expected to survive for lengthy periods of time in the middle of the open ocean? “Wave Gliders are constructed of materials that resist seawater corrosion,” Bailard noted. “They are also often coated with special paint to reduce barnacle growth and other biofouling.”

The fortitude of these robots has already been put to the test, with four Wave Gliders recently proving the design’s long-term durability by completing a year-long world record journey of more than 12,500km across the Pacific Ocean in the widely-acclaimed PacX Challenge.

One of the company’s flagship Gliders, the G2, not only survived Hurricane Isaac in August, but was able to transmit groundbreaking data just 60km from the eye of the storm in the Gulf of Mexico.

While some may have fears as to how well the robots can operate out on the open ocean, these can be swiftly assuaged. “Wave Gliders are programmed to detect and avoid shipping traffic and to navigate or hold station at sea,” Baillard explained. “They are also overseen by shore-based pilots who monitor their situation and intervene if necessary to help the Wave Gliders avoid traffic or the most severe ocean weather.”

Endless possibilities of the Wave Glider

There are multiple possibilities to investigate when it comes to applications for the Wave Glider. “We have already demonstrated these cellular and RF radio communications, while we continue to evolve the capabilities of the base platform to support new capabilities and increased performance,” Bailard confirmed.

“New sensors are continuously being added, while we have just completed characterisation tests for Teledyne RDI’s Sentinel acoustic doppler current profiler (ADCP) for accurately profiling ocean currents from the surface down to [more than] 100m in depth.”

Indeed, because companies can opt for a customised Wave Glider configuration, the possibilities are endless. “Just one example of this is the Carbon Wave Glider developed by the US National Oceanic and Atmospheric Administration (NOAA) and its Pacific Marine Environmental Laboratory (PMEL),” said Bailard.

“Indeed, because companies can opt for a customised Wave Glider configuration, the possibilities are endless.”

“PMEL worked with Liquid Robotics to modify a Wave Glider so it could be integrated with a very precise, though large, instrument to measure the levels and movement of carbon dioxide gas between the atmosphere and oceans at the surface layer.”

Clearly, then, the biggest positive for this technology in relation to the shipping industry is its combination of mobility and low cost, as well as the open-ended and diverse nature of its applications.

The technology could also potentially represent a base from which other advances in shipping could be made – for example, an extension of the technology to create larger vessels powered by wave motion and reduce carbon emissions and reliance on fossil fuels. As Bailard concluded: “The future product roadmap certainly includes new advancements utilising this propulsion technology, just imagine the possibilities!”

Marine pollutant monitoring has gone robotic with the introduction of SHOAL, an autonomously controlled fish.

Remote-operated vehicles (ROVs) are increasingly taking over the inspection, repair and cleaning of ship hulls.