In the decade since its launch, NAVTOR has continued to refine its software to improve efficiency. It launched NavStation 6.0, the latest version of its passage planning software earlier this year. It brings all digital navigational data into one place, helping crews to plan and organise safe and economical voyages. Using its software, NAVTOR estimates that the time spent planning a voyage is reduced by 85% to just 30 minutes.

The ECDIS mandate requiring all vessels to have one ECDIS system on the bridge came into force in 2018 making electronic charts standard. However, nautical publications, charts, and voyage planning remain among the five top deficiencies in the industry, which Hjøllo explains are often to do with failure to update charts. 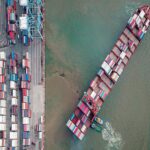 While many of its competitors use USB sticks or CDs, delivered on board to update charts before a voyage, NAVTOR has introduced the NavBox, a software and hardware solution that automates the distribution and updating of digital charts and navigational data. New data is pushed over existing SATCOM systems to NavBox, keeping vessels fully compliant and up-to-date with minimal administrative work required.

Improved efficiency brings a reduction in fuel usage; not only does this mean less cost for ship operators but also a reduction in emissions. With the IMO having adopted mandatory measures to reduce greenhouse gas emissions from international shipping –the industry is expected to reduce its emissions by 40% by 2030 – this is another huge benefit for operators.

Through NAVTOR’s recently launched NavFleet solution, ship data is sent back to shore, where shoreside teams can provide navigators with real-time operational insight to optimise performance, improve efficiency, and subsequently reduce emissions. According to Hjøllo, implementing Navtor’s technology can reduce a vessel’s emissions by 10-15%.

“We can follow the vessel and see almost in real-time whether there is too much fuel being used on this vessel, at this given time, in this given weather,” Hjøllo says. “Now we also follow in this NavFleet application that the vessel is following its route. We can see whether they are actually inside or outside the planned route, so that will also contribute to safety and also less environmental spill.”

As well as delivering time- and cost-saving benefits, technology is also helping with the issue of compliance. With increasing numbers of environmental regulations being implemented around the world, software such as OneOcean’s EnviroManager, for instance, can reduce regulatory complexity for ship operators. Including data from more than 500 environmental zones and 170 nations, Enviromanager’s database ensures that crews are aware of the rules and regulations they will encounter during a voyage, reducing the time-cost of doing this manually and removing the risk of human error.

Reducing risk in our congested waters

According to the United Nations Conference on Trade and Development, approximately 80% of international trade goods are carried by sea, with the total volume estimated to have reached an all-time high of 11 billion tons before the pandemic. Shipping lanes are more congested than ever before.

“With this comes challenges –  there are now more, and larger ships on the water causing congestion, and crew resources are spread thinly, resulting in lack of team and experience,” Yarden Gross, co-founder and CEO of marine collision avoidance technology firm Orca AI explains. “As a consequence, we have seen the number of accidents double over the past few years – both minor and major.”

Every passing ship is analysed to determine collision potential. Smart alarms will sound automatically when the system detects that there is significant potential for the vessel to collide with an obstacle or become grounded in shallow waters. Orca AI uses thermal cameras and can detect hazards in all conditions, including at night, in fog, during sandstorms and more.

“The technology enables even less experienced officers to cope with the most complex situations, including those with low visibility,” Gross says.

“Without the use of the technology, the navigational officer is required to consistently create a picture of the surroundings and calculate risk, a process that can lead to many mistakes regardless of crew experiences,” Gross explains. “Acting as a ‘co-captain’, AI processes and provides insights, taking away the traditional analytical process.”

However, these AI systems could soon be promoted to the helm. In 2018, the UK’s Maritime and Coastguard Agency established the Maritime Autonomy Regulation Lab (MARLab) to provide a point of contact between government, academia, and the shipping industry as it prepared for an autonomous future.

In June, Mayflower 400, an autonomous ship designed and developed by marine researchers ProMare and technology partner IBM, is set to become the first full-sized, fully autonomous, unmanned ship to cross the Atlantic Ocean, offering a small glimpse of what’s to come.

“Powered by data and algorithms, AI increases autonomous capabilities of ships and we predict there will be a gradual rise in autonomy as technology develops, where eventually a ship will be able to sail by itself from A to B without the manual assistance of the navigational officer,” Gross says.

Luke Christou is a B2B and technology journalist and contributor across the Verdict network.
SUBSCRIBED