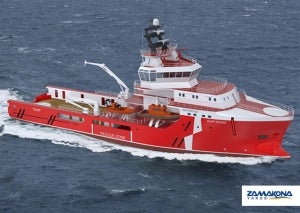 Atlantic Offshore has ordered a new vessel valued at €25m from the Spanish shipyard Zamakona Yards in Bilbao. The ship is the ninth newbuild, and Atlantic Offshore expects that there will be more new vessels in the fleet over the next few years.

This is the third time the Bilbao-based shipyard has constructed vessels for Atlantic Offshore. The contract is part of a modernisation programme. Atlantic Offshore has recently signed agreements for a total of nine new vessels, four of which are already delivered. The fleet consists of a total of 24 ships, of which 19 are company-owned, and five are on management.

The vessel under construction in Bilbao is a field support vessel (FSV) with Havyard Design HY820, which will operate for Shell UK over a period of five years, and the corresponding option. The ship will be completed and in operation in the second quarter of 2015. Overall, Atlantic Offshore has invested €2.2bn in fleet renewal, and the newbuilds from Zamakona Yards involve approx 40% contract participation of Norwegian subcontractors.

Oil producers place great emphasis on modern ships that meet the most stringent requirements and regulations. Additionally, the new ships contain features beyond the emergency response they perform, such as towing, loading and storage capacity, says CEO Roy Wareberg of Atlantic Offshore.

Zamakona Yards is one of Spain’s main shipbuilding and ship repair groups. With more than 41 years of experience in the industry both in the Cantabrian Sea and in the Canary Islands, our group brings together more than 1.000 professionals who strive to provide our clients with the best service.

Zamakona Yards is one of Spain's main shipbuilding and ship repair groups. With more than 40 years of experience in the industry both in the...