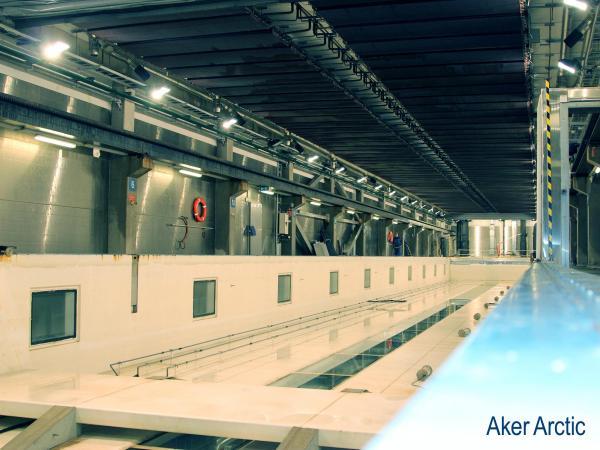 The icebreaking season in Finland typically ends in May. Around the same time, the cooling system in Aker Arctic’s ice laboratory in Helsinki, Finland, is switched off, and the model basin is allowed to warm up for the annual summer maintenance break.

Aker Arctic operates its own ice model testing facility at the company’s main office in Helsinki, Finland. Using the in-house developed FGX model ice, the 75-metre ice tank can be used to get reliable icebreaking performance predictions for ice-going ships and study other ice-related phenomena in model scale.

Aker Arctic and its predecessors have been involved in the development of most of the world’s icebreakers and other icebreaking vessels, including novel ideas such as the double acting ship and the oblique icebreaker, and the ability to test new concepts independently has been the key to this success story.

Cold ambient temperature and saline water are challenging operational environments not only for real ships, but also for the test equipment used in the ice model test facility. In order to keep all systems fully functional during the 100-odd annual test days, Aker Arctic’s test engineers and laboratory personnel carry out various service and maintenance tasks during the summer months. This also allows turning the cooling system off for what is typically the hottest time of the year in Finland.

While the water in the basin is continuously run through filters and thus does not require changing, this year the ice tank was drained for three weeks so that the underwater parts could be painted. In addition to general maintenance work around the laboratory premises, the test carriages and the refrigeration plant are also overhauled during the service break.

Sometimes new equipment is also installed and tested before the model testing continues. The total duration of the service break is typically about a month depending on the test schedule in late spring and early autumn.

As summer turns into autumn and the test engineers return from their summer vacations, Aker Arctic’s ice laboratory is gradually brought back to service. It takes about a week to fill up the basin with 1,300t of tap water and more than a dozen tonnes of salt to adjust the salinity to the correct level. Once flooded, the basin is allowed to cool down to freezing temperatures for another week.

The purpose of these tests is to verify that the model ice breaks in the same way as real ice and the measured ice resistance corresponds to the full scale results in Aker Arctic’s database. Once these tests are completed successfully, the ice laboratory will give reliable icebreaking performance predictions for new ship projects.

Aker Arctic has announced it will be presenting at Nor-Shipping in Oslo, Norway. The event...

The year 2019 has marked 50 years since the first ice-model testing project was carried...

A naming ceremony has been held for Arctic condensate tanker Boris Sokolov at Guangzhou Shipyard...

At any given time, Aker Arctic’s ship design department has a few dozen active projects...