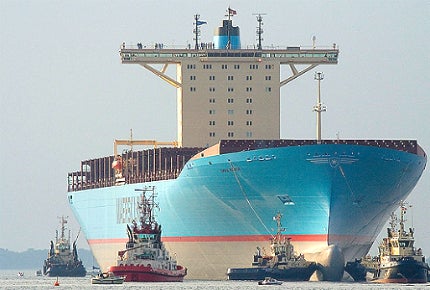 Emma Maersk is the largest active vessel in the world

The world’s 14 biggest cruise liners have all been built for the Royal Caribbean International cruise line, with the majority of the largest ships being constructed at STX Europe’s Turku Shipyard in Finland. The latest manifestation of these tremendous floating resorts comes in the form of the company’s Oasis-Class ships.

MS Allure of the Seas

“MS Allure of the Seas is the largest cruise ship in the world.”

Spanning 16 decks and able to hold up to 5,400 passengers, MS Allure of the Seas is the largest cruise ship in the world.

MS Allure of the Seas really pushes the envelope for cruise entertainment, boasting an impressive sports zone, including the largest jogging track at sea, miniature golf course, two flow rider surf simulators and a sports deck with basketball and volleyball courts, as well as a 1,380-seater theatre and even a landscaped themed garden with tropical foliage and an on-site horticulturalist.

MS Oasis of the Seas

MS Oasis of the Seas was the world’s largest cruise ship prior to the arrival of its sister ship. Built at the same shipyards as the Allure, the specifications for Oasis are virtually identical to those of the Allure, which duplicated some of the Oasis of the Seas’ new features.

These included a nine-deck high zip-line cable, full-size carousel, the AquaTheatre amphitheatre (the largest freshwater pool on any cruise ship) and the Rising Tide bar, which moves slowly up and down between three decks in the cruise liner’s themed Central Park neighbourhood. 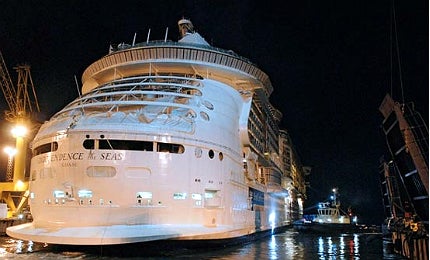 Undertaking its maiden voyage in May 2008, Royal Caribbean’s Independence of the Seas is still one of the world’s largest cruise ships – along with its sister Freedom-Class ships, the Freedom of the Seas and Liberty of the Seas – despite having been overtaken by the company’s Oasis-Class vessels.

Some of the features of this ship include the fleet’s first heated freshwater pools, an ice skating rink, full-size boxing ring and a host of other amenities, ranging from a fifties-style diner and other restaurants to spas and fitness centres.

“Emma Maersk is the largest active vessel in the world.”

The Emma Maersk is highly automated, allowing the ship to be operated by a crew of just 13 people.

It also has a number of environmentally-friendly features, such as engine exhaust recycling, which reduces emissions and increases efficiency by 12%, while the hull is coated with a silicon-based paint to reduce drag and improve efficiency. 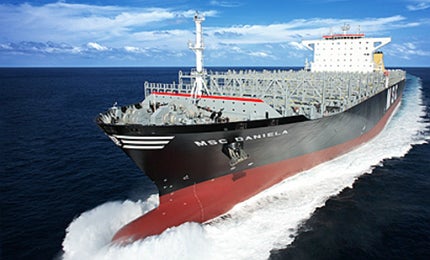 The 165,000t, 366m long MSC Daniela, which sails under a Panamanian flag, was built by Samsung Heavy Industries at the Geoje Shipyard in South Korea and delivered to Mediterranean Shipping Company (MSC) in 2008.

With a capacity of 13,800 TEU, the Daniela was at the time classed as the largest container ship ever built, in terms of TEU, by the Germanischer Lloyd society, which aims to prevent marine pollution and protect life and safety at sea.

It remains one of the largest ships in the world.

“CMA CGM Christophe Colomb is the largest container ship ever to cruise under French colours.”

The 365.5m long CMA CGM Christophe Colomb is the largest container ship ever to cruise under French colours, with a designed gross tonnage of 153,022t.

Also built at Geoje yard in 2009, by Daewoo Shipbuilding & Marine Engineering (DSME), Christophe Colomb was the first of eight sister ships ordered by the CMA CGM group, all of which will be technically very similar to the MSC Daniela-class ships.

It is also the first CMA CGM vessel to be equipped with a pre-swirl stator and twisted leading edge rudder, which together cut fuel consumption and emissions by two to four percent. 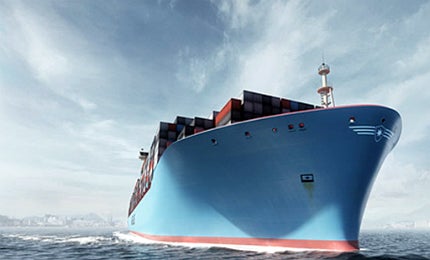 Maersk Line signed a $1.9bn contract with DSME in February 2011 to build ten Triple-E (economy of scale, energy efficient and environmentally improved) Class vessels. The Triple-E class is an improved and modified version of Emma Mærsk.

“Triple-E class is an improved and modified version of Emma Mærsk.”

The deal included an option for 20 more vessels, to be exercised by December 2011, which would take the total value of the contract to $5.7bn (the single largest contract value in the shipbuilding industry).

The option for ten more vessels was exercised in June, with the first ten Triple-E class vessels scheduled for delivery in 2013/14, followed by the second set of ten ships in 2014/15.

Each ship will cost around $190m. They will be the largest and most energy efficient container ships in the world, with a container carrying capacity of 18,000 TEU and a 20% reduction of carbon dioxide emissions, compared to the most efficient container vessel currently active.

The Frank A Shrontz was delivered to Chevron Oil in 1998 by Samsung Heavy Industries of South Korea.

The first of four new-generation very large crude carrier (VLCC) tankers, the Frank A Shrontz has an overall length of 331m, a displacement of 350,849t and a gross tonnage of just more than 160,000t.

This huge tanker has a cruising range of 27,500 nautical miles and has a helicopter landing area, capable of handling a Sikorsky S58T with a 20.1 m clear zone.

“The Tembek is part of a new generation of LNG mega-ships.”

Completing its first LNG delivery to Milford Haven in England in March 2009, the 315m long Tembek LNG carrier, which has a cargo hold capacity of around 216,000m³, is one of 14 ships built to service the Qatar Gas II LNG facility.

Built at the Geoje yard by Samsung Heavy Industries, the Tembek is owned through a joint venture between Qatar Gas Transport Company and OSG Gas, from which Qatargas has chartered the vessel.

The Tembek is part of a new generation of LNG mega-ships (along with other Q-Flex and Q-Max gas carriers) offering roughly 40% lower energy requirements than conventional vessels.

The Tembek uses diesel electric propulsion, thanks to its own liquefaction plant, which returns boil-off gas to the hold and offers potential gas and fuel economy savings of as much as $5m a year.

Launched in 2007 following construction at the Aker Yards in France, Gaselys was the world’s largest liquefied natural gas (LNG) carrier at the time, measuring 290m in length and boasting a LNG capacity of more tha 154,000m³.

The vessel runs between LNG terminals in Egypt and France and is equipped to handle arctic conditions for operations in Snohvit, Norway.

Along with its sister ship, Provalys, Gaselys represented a new class of environmentally-friendly LNG carrier, using the low-cost CS1 gas containment system for faster fitting and construction, as well as a 15% cost reduction.