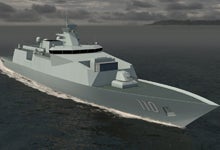 The hullform of the warship was developed for open ocean performance and has the ability to support reconfigurable top side arrangements.

The ships are fitted with modular mission systems to reconfigure based on role requirements and respond to changing threats.

The vessel has a surface displacement of 700t and features a double-hull cross-section designed for Target Echo Strength reduction.

The BMT Vidar-7 is designed to offer a wide range of roles such as ASW, ASuW, ISR, Special Forces, training, coastguard, anti-piracy and land strike operations.

The submarine’s internal and external spaces can also be reconfigured to achieve multi-mission capability and submarine re-role.