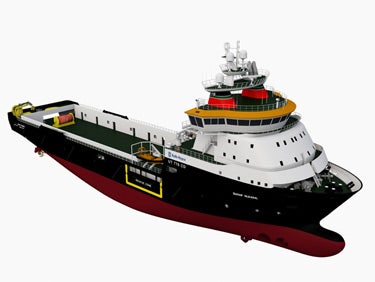 The vessels will be built at Hyundai Mipo Dockyard in Korea and are scheduled to be delivered between late 2013 and the end of the first half of 2014.

Upon delivery, the vessels will be deployed to support BP’s West of Shetland (WoS) and Norwegian operations.

The purpose-built vessels are designed and will be used to provide long-term support to the UK oil and gas company’s North Sea business by promoting safety, efficiency, crew retention and spill response.

The vessels will be equipped with special tanks to carry fluids required for planned enhanced oil recovery (EOR) schemes.

BP said that the vessels, which will be hired to BP Exploration Operating Company on 15-year bareboat charters, will help deliver its long-term business strategy in the North Sea.

BP North Sea regional president Trevor Garlick said the new vessels will provide the company with a number of safety and commercial benefits, as well as better deployment of technology.

"Improving our capability to recover more oil from our reservoirs is crucial to the future of the North Sea," Garlick said.

According to BP, 80% of the total project and operating costs will be spent in local economies in Scotland and Norway.

Over the next five years, BP is investing $10bn in the North Sea – including major projects in the UK and in Norway.

The UK firm produces over 200,000 barrels of oil equivalent daily and it has over 3 billion barrels of proven and contingent resource available.

Image: BP’s PSVs built at Hyundai Mipo Dockyard are scheduled to be delivered between late 2013 and 2014. Photo: BP