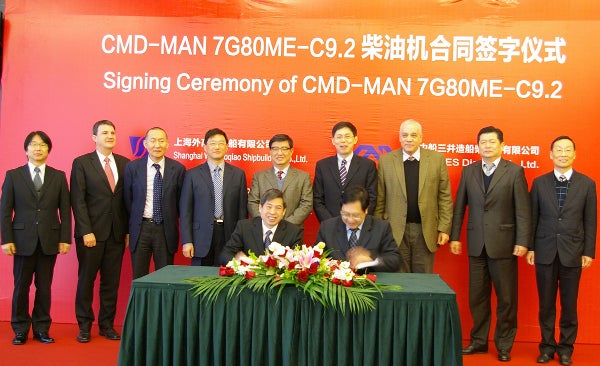 Scheduled to be delivered in June next year, the CMD-MAN 7G80ME-C9.2 engine will have improved energy efficiency feature and meet all Tier II criteria.

The G-series engine will be equipped on a 319,000 dwt, ABS class very large crude carrier (VLCC) to be built for Maran Tankers of Greece by Shanghai Waigaoqiao Shipbuilding (SWS).

CMD chairman Qin Wenquan said that the 7G80ME-C9.2 engine - rated at 31,150KW - is a new, green, marine diesel engine with an ultra-long-stroke and lower speed that follow the design principles of the Mark 9 engine series.

"The G-type engine is a realisation of the most advanced technology, offering advantages in fuel consumption, exhaust emission and energy efficiency," Wenquan said.

According to the company, propeller efficiency can be improved by about 3.6% if the engine is run in optimum conditions including an optimum propeller set-up, while it will also reduce overall running costs by 4.6%.

MAN Diesel & Turbo managing director Goetz Kassing said the G80's longer stroke results in a lower rpm for the engine driving the propeller: a reduction from 78 rpm for the S80 engine to 68 rpm for the G80.

"The lower optimum engine speed allows the use of a larger propeller," Kassing said.

MAN Diesel & Turbo had introduced the G-type programme into the market in October 2010 with the launch of G80ME-C9 model and later expanded the programme in May last year by adding G70ME-C9, G60ME-C9 and G50ME-B9 models.

The company said that the G-types have designs that follow the principles of the large-bore, Mark 9 engine series that it had introduced in 2006, while its longer stroke reduces engine speed.

CMD is a joint venture between Chinese CSSC and CSSC Holdings and Japanese ship builder Mitsui.