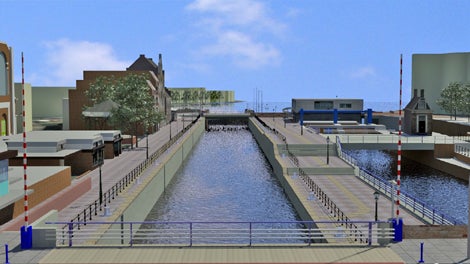 Heijmans has secured a €30m contract from the Province of Noord-Holland in the Netherlands to renovate the 110-year old Wilhelmina Lock in the city of Zaandam.

Upon completion, the renovated Wilhelmina lock will be suitable for mixed traffic and will be able to accommodate Class CEMT Va vessels, which are 110m long.

The lock’s two existing bridges will be renovated and the passage width will be increased from 12m to 14m.

Plans also include increasing the threshold depth and length of the chamber as well as replacing the existing cup-shaped lock chamber with a rectangular chamber.

The renovation of the lock is intended to remove it as an obstacle to entering the Zaan river, increasing shipping traffic along the route.

Construction will start in 2014 following work planning, which is scheduled to commence in 2013; the project is expected to be completed in May 2015.

The province awarded the contract to Heijmans on the basis of a design and build contract, which also included Economically Most Advantageous Tender (EMAT) criteria.

Heijmans said its proposal was prepared with the aid of building information modelling (BIM) software, in which all of the data available for the design and construction were included in 3D and will be shared with the partners involved in the project.

The project forms part of the Vaart in de Zaan (Navigation on the Zaan) programme, which was created to make the Zaan river accessible to the inland shipping vessels of the future.