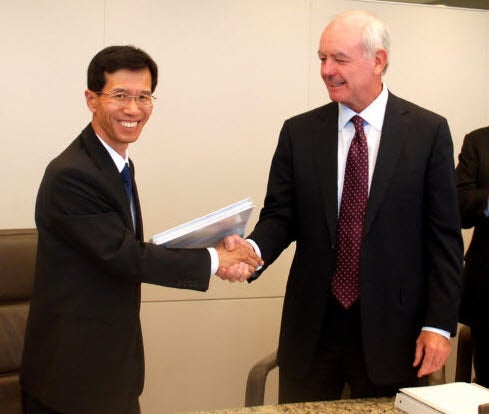 The option is part of the $1.12bn contract that Rowan awarded to HHI in May 2011 to build a pair of drillships with an option for an additional drillship of the same class.

The new drillship will be built to the GustoMSC P10,000 design and will be equipped with a thruster canister, which helps keep the ship in position while drilling.

Delivery of the fourth drillship is scheduled to take place in March 2015.

Each vessel will be equipped with a second blowout preventer (BOP) to reduce non-productive time, as well as 2,000ft of additional riser to allow operations in water depths of up to 12,000ft.

The additional cost for the riser, BOP and training and ramp-up will be about $75m.

According to Rowan, the cost of the fourth drillship will be about 6% more than the previous three drillships due to increases in equipment prices and projected labour costs.

Rowan also has an option for a similar fifth drillship that can be exercised in the fourth quarter of 2012 and would be delivered in the third quarter of 2015.

Each vessel will be capable of accommodating 210 people and will be equipped with retractable thrusters, dual-activity capability, five mud pumps, dual mud systems and a maximum hook-load capacity of 1,250t.

They will also be fitted with three 100t knuckle boom cranes, an active-heave 165t crane for deployment of subsea equipment and a variable deck load capacity of 20,000t.