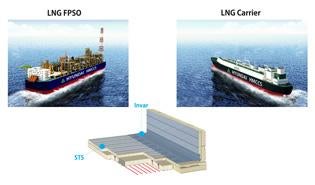 HHI has secured design approval for the new containment system from classification societies including the American Bureau of Shipping (ABS) and Det Norske Veritas (DNV).

The containment system incorporates a dual-metal barrier and high-performance insulation systems, and is designed for use in LNG carriers, LNG FPSOs, LNG-fuelled vessels and LNG-bunkering systems.

The system’s thin STS304L and Invar-alloy barriers, optimised to manage thermal, fatigue and sloshing loads, are designed to prevent LNG leakage at the welded secondary barrier.

Compared to conventional insulation panels, the new panels, which are made up of low-density polyurethane foam and glass fibre composite material, reduce the boil off rate of the stored LNG by over 10%, according to HHI.

The new insulation panels are designed for areas prone to sloshing damage such as LNG tank corners.

HHI introduced an independent LNG storage tank model in November 2012 called the Lobe-Bundle Tank, which uses ring-shaped plates instead of the usual flat plates to reduce the weight of the tank and building cost, as well as a spray-type insulation to shorten construction time.