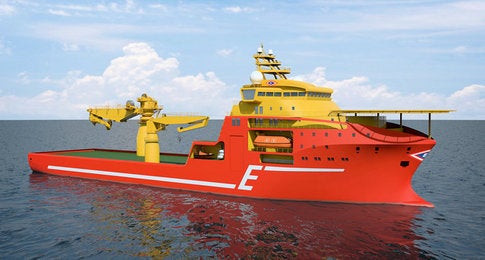 The vessel will be built to the SALT 301 OCV design of Salt Ship Design at Kleven Maritime’s Verft shipyard in Ulsteinvik, Norway.

Scheduled to be delivered in the second quarter of 2014, the vessel will be equipped with two offshore cranes, 400t and 100t respectively.

According to Eidesvik, it can exercise the option to build another vessel, which would be delivered by early 2015.

During the design, the vessel will be incorporated with environmentally friendly features to meet future environmental requirements.

Kleven Maritime currently has an order book of 11 vessels worth NOK5.5bn ($900m).

Image: The vessel will be built to SALT 301 OCV-design and equipped with offshore crane pair. Photo: Kleven Maritime