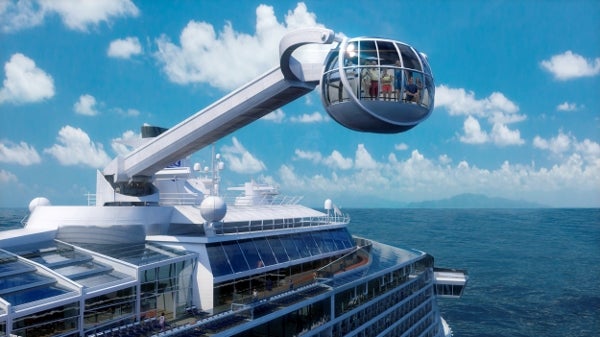 By combining a crane system and viewing gondola, North Star is expected to lift guests onboard the first Quantum class ship up to 91m above sea level with an outreach of 41m, to provide them with 360-degree views of the sea and surrounding ports of call.

The slewing feature of the electro/hydraulically-driven crane, which will be delivered to Royal Caribbean under an order booked in the second quarter of 2013 order intake, will allow the 7.1-tonne viewing gondola to swing out over the sea.

Designed to standards set by German technical certification company TÜV süd, the crane will accommodate up to 14 guests in addition to a crew member in a jewel-shaped glass capsule, which features a stabilising system to keep it level with the vessel’s deck.

MacGregor sales manager Jonas Hägglund said: "We are the first crane supplier involved in anything like this type for a cruise ship".

North Star will have two large power units, each with the ability to independently drive the crane at a reduced speed, as well as a diesel-driven emergency power pack and other safety measures including automatic cut outs and safety valve overload protection on all crane motions.

"Safety is paramount, and the operator needed a crane supplier that would not only deliver the highest safety standards, but also proven, reliable technology for the North Star guest experience," Hägglund said.

MacGregor will use its CC3000 crane control system and a separate PLC safety system to control North Star and ensure smooth and immediate crane movements with stepless speed control.

The system has been designed to minimise vibrations and noise, with the whole main power pack completely rubber-suspended and the crane housing kept isolated.

"Given the vessel’s cruising areas, the system is fitted with an air-type cooler to keep the crane’s hydraulic oil at a moderate temperature even in very hot ambient conditions; this ensures a long oil life and reliable crane performance," Hägglund said.

Quantum of the Seas, which is under construction at German shipyard Meyer Werft, will debut during the winter 2014/15 season, sailing out of New York Harbor from her homeport of Cape Liberty; her sister-ship Anthem of the Seas will sail in early 2015.

Image: North Star will lift guests 91m above sea level to give them panoramic views of the sea. Photo: Courtesy of MacGregor.