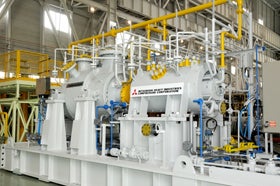 The FPSO unit will operated by Tuip, a subsidiary of Petróleo Brasileiro (Petrobras) in BM-S-11 region off Brazil coast who will use the compressor packages as the core unit of equipment to export natural gas extracted from oil fields.

Under the order, MCO will also be responsible for the design, procurement, manufacture and yard test of the compressor packages.

Scheduled for delivery during the third quarter of 2014, the FPSO with compressor package on board will be installed in the Cernambi South area, 300 km south of Rio de Janeiro, Brazil.

Last year, MCO delivered compressors for a FPSO,which Petrobras is deploying for use at the Sapinhoá field.

In addition, FPSO Cidade de Sao Paulo MV23 is currently being built and scheduled to be installed in the fourth quarter of this year.

Image: MHI’s compressor packages will be installed on a FPSO, which Tupi plans to operate in the area of BM-S-11 at Brazil’s coast. Photo: MHI