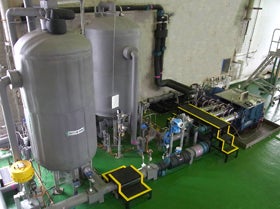 Mitsubishi Heavy Industries (MHI) has developed a new system to supply high-pressure gas that will enable natural gas to be used as fuel for marine engines.

Upon delivery the unit will be installed at MES’s facility in Tamano, Okayama Prefecture, the system will be employed for verification demonstration using marine diesels, which are manufactured by MES.

MHI’s new system will deliver LNG at 30 megapascals (MPa) gas by liquid pumping, and it is characterised by its compact configuration and less power consumption.

The liquid pump without speed reduction mechanism has been adopted by a hydraulic driver, which facilitates variable speed adjustment and high flexibility of layout.

The system consists mainly of a unit to transfer LNG at high pressure as per the fluctuations in the demand of the engine.

The new system also consists a hydraulic unit as power source, a CNG bottle unit to buffer the CNG pressure variation, a unit to produce a compressed natural gas (CNG) by heating LNG to normal temperature and gas combustion unit to safely dispose low pressure off-gas and to use its exhaust heat as heat source.

By combining the system with 2-stroke, low-speed marine diesel engines, the engine will be a high efficiency propulsion system.

According to the company, measures are being taken to prevent global warming, energy savings and reductions in CO2 emissions in the area of international marine transportation.