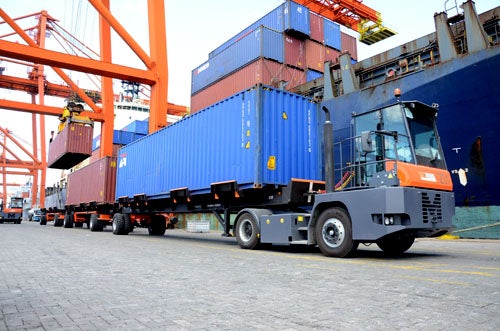 According to ICTSI, the new line allows more containers to be transported in a single haul when compared to the traditional single-trailer system.

Short MTS comprising two or three trailers in a set has been deployed by ICTSI at the MICT Berth 5 for short-distance trips to and from Berth 6.

For the MTS, MICT first received 16 units of the Houcon Holland custom-made trailer, which arrived on the ER Freemantle.

An MTS is composed of one MAFI tractor, which can handle multiple trailer sets in "ship-to-stack" mode, and several trailers.

Containers to and from the wharf can be transported by an MTS, which is made up of three trailers, during vessel operation.

A maximum of three 40ft containers or six 20ft equivalent units can be hauled using the new MTS in this mode in a single trip.

As part of the contract, ICTSI’s Mexican subsidiary Contecon Manzanillo will receive four super post-Panamax Kalmar quay cranes (QCs) and ten Kalmar rubber-tyred gantries (RTGs) during the first half of 2013, while MICT will receive eight RTGs throughout 2012.
Addition of the new equipment is expected to increase the current annual freight handling capacity of 1.9 million teu to 2.5 million teu at the MICT.

Port management company ICTSI is involved in the operations and development of 23 marine terminals and port projects in 17 countries worldwide.