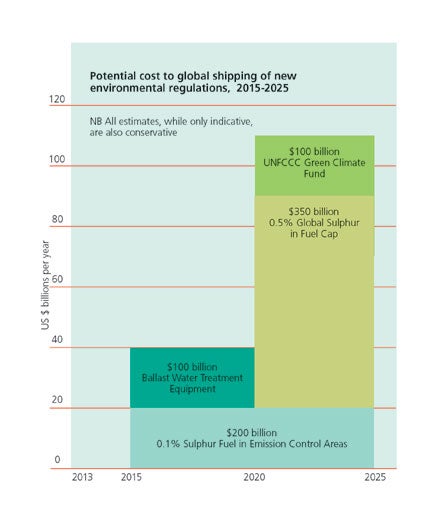 International Chamber of Shipping (ICS) believes that the shipping industry is expected face environmental costs of around $500bn between 2015 and 2025, representing around $50bn of additional capital and operating costs per year during the period.

New regulations like the 0.5% global sulphur cap is to come into force from 2020, as well as the 0.1% sulphur requirement that will be imposed in Emission Control Areas in north-west Europe and North America from 2015.

ICS said the costs of equipping new ballast water treatment systems will also add to the capital costs, as well as the contribution the shipping industry might need to make towards the United Nations Framework Convention on Climate Change (UNFCCC) Green Climate Fund.

ICS chairman Masamichi Morooka believes that shipping industries must persuade governments to avoid implementing more environmental legislation costs, which could cripple shipowners, as many companies will already struggle to survive during the difficult years ahead.

"The imminent switch to vastly more expensive, low-sulphur distillate fuel is a very serious concern which is compounded by worries about the adequacy of supply and the dangers of modal shift," Morooka said.

"Many of the expensive environmental regulations that are about to enter into force were conceived in a different world, at a time when shipping markets were booming and finance for retrofitting had not dried up," Morooka added. "Unless this is understood, there is a danger of creating real barriers to investment in our industry as we hopefully move closer to recovery."

According to ICS, environmental protection must remain a priority for the shipping industry but caution must be exercised before enforcing sweeping regulatory changes.

Morooka predicted that freight rates for most of the sectors and trades are not likely to change much before 2015 or 2016.

Market forces will find a solution to stagnant freight rates, which will likely involve large numbers of ships going to recycling yards much earlier than their owners had originally planned, Morooka said.