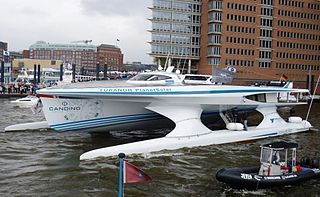 Solar-powered catamaran MS Turanor Planetsolar has arrived in the UK and will be docked at Canary Wharf in London after a two-month scientific expedition tracking the Gulf Stream.

Constructed with lightweight carbon, the 35m-long and 23m-wide vessel weighs around nine tonnes and moves at an average speed of five knots.

Designed by Craig Loomes of New Zealand, the vessel can achieve a maximum speed of 14 knots.

The boat was first launched in March 2010 and has successfully crossed the Atlantic Ocean in 22 days.

The vessel is used by the University of Geneva (UNIGE) for scientific research and is fitted with instruments to analyse climatic changes in the Gulf Stream.