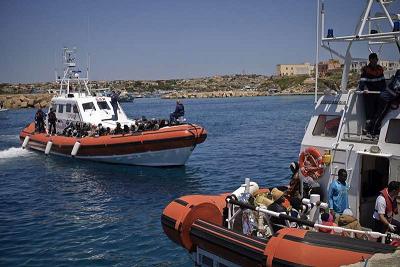 The search for survivors near the Italian island of Lampedusa continues today after the sinking of a ship carrying migrants from Africa early on Thursday morning.

The boat carrying 500 migrants from Libya to Italy sank following a fire. At least 100 bodies have been recovered with another 200 still missing. Authorities have rescued 150 people so far.

The boat, which was carrying migrants from Eritrea and Somalia, caught fire half a mile from the coast. It is believed that passengers set a piece of material on fire to attract attention of the other vessels after the engine of the boat had a malfunction but the fire then spread.

As the fire spread, the passengers moved to one side of the boat resulting in its capsize.

Alfano said that 16,000 illegal migrants were rescued in Italy this year. Lampedusa, located between Tunisia and Sicily, is a strategic destination for migrants from North Africa.

Thousands of Africans flee to Europe every year. The UN estimates that there will 232 million international migrants in 2013.

According to figures from the World Bank, migrants from developing countries are predicted to send home around $414bn in 2013. It is forecasted to rise to $540bn by 2016.

Meanwhile, on the sidelines of the General Assembly High-level Dialogue on Migration and Development in New York, United Nations Secretary-General Ban Ki-moon said, "It is our collective responsibility to make migration work for the benefit of migrants and countries alike."

"I offer my deep condolences and hope that we all take this as another spur to action," he added in reference to the Italy incident.