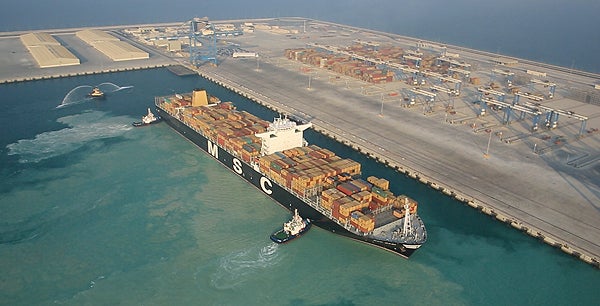 The port is expected to help in achieving the Abu Dhabi Economic Vision 2030 of a sustainable and diversified economy, ADPC said.

Khalifa Port received its first ship from a commercial customer at 7am on September 1, the MSC Bari, which loaded and unloaded containers from the container yard.

The port, which is part of the Kizad industrial zone, has been designed with a 16m draft and a 4km quay wall.

Khalifa Port has a capacity of 2.5 million teus a year, with an additional 12 million tonnes of general cargo, including four million tonnes a year from an Emirates Aluminium berth that opened in 2010.

The port features ship-to-shore cranes and a terminal operational building that houses the computer technology used to control much of the container terminal.

ADT chief executive officer Martijn Van de Linde told the Khaleej Times that the company currently handles about 10-15 ships a week at Mina Zayed port and similar number of ships would be handled at Khalifa Port.

"But, gradual ramping up from where we have started right now, we are handling four ships a week, which will increase to 15 vessels by year-end," Van de Linde said.

The port, which has been built on the reclaimed Port Island, has an offshore area of over 2.7km², while the container terminal is situated more than 4km out to sea.

The official inauguration of Khalifa Port will be held at the end of 2012.