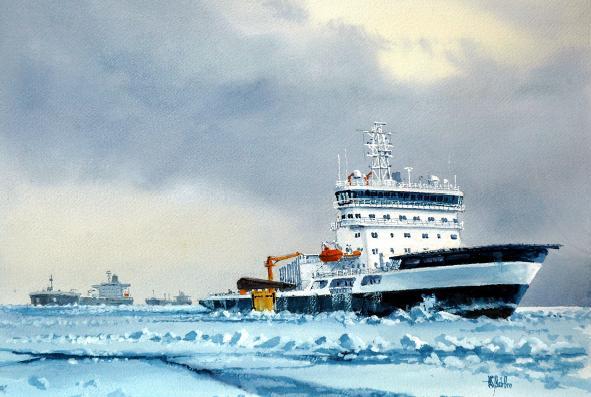 Aker Arctic Technology has secured a contract from The Finnish Transport Agency to design a new icebreaking vessel.

The design for the new icebreaker will be provided by Aker Arctic, together with Finland-based consulting and engineering firm ILS.

Aker Arctic and ILS will also be responsible for preparing the technical documents needed to hold the tender for its construction in compliance with its performance requirements.

Both companies will help the transport agency negotiate with shipyards later in autumn 2013, after completing the design.

About €125m has been allocated by the Finnish Government for the construction of the new icebreaker, which is expected to start by winter 2016.

The new vessel will be built to achieve the same icebreaking performance as the Urho-class icebreaker, and its diesel-electric machinery will help in moving continuously through ice of about 1.6m thickness and break a 25m wide channel in 1.2m thick ice at a speed of six knots, said Aker.

The vessel is expected to be able to reach 9-11 knots of average assistance speed in the Baltic Sea.

According to the company, the draught of the vessel with full fuel tanks will be a maximum of 8m, which will allow it to provide icebreaking and assistance services to merchant vessels on all major sea lanes.

Designed to accommodate 24 persons, with capacity for additional crew in case of oil spill response operations, the new icebreaker will reportedly have a service speed of at least 16 knots in open waters.

Apart from collecting spill oil at wave heights of about 2m, the new vessel will also be able to carry out emergency towing missions 95% of the time in the open water, ice and wind conditions existing in the Baltic Sea.

Designed with a service life of 50 years, the vessel will have tanks and heating capacities to recover 1500m³ of oil.

Finnish Transport Agency director general Antti Vehviläinen said that with the new technology, the agency aims to enhance its level of icebreaker services.

"Our oldest icebreaker Voima is already 60 years old, and it is important that after a 15-year long gap we are able to renew our icebreaker fleet," Vehviläinen said.

Image: The new Finnish icebreaking vessel will be capable of moving continuously through ice up to 1.6m thick. Image: Aker Arctic.

Future of the Finland Defense Industry - Market Attractiveness, Competitive Landscape and Forecasts to 2022

Future of the Finnish Defense Industry - Market Attractiveness, Competitive Landscape and Forecasts to 2023