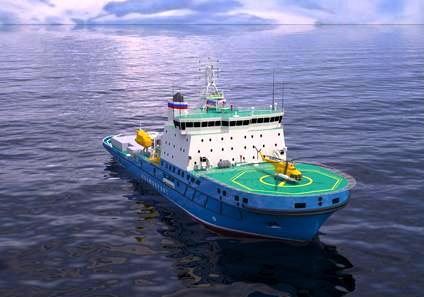 The Russian Ministry of Transport, together with OJCS Vyborg Shipyard, has awarded a contract to Finland-based Arctech Helsinki Shipyard to construct a 16MW icebreaking vessel.

Under the €100m contract, Arctech Helsinki will undertake the construction, outfitting and commissioning of the vessel.

Work on the proposed new vessel, which forms part of the series of three new buildings that the Russian Ministry of Transport has ordered from Vyborg Shipyard, is slated to commence immediately.

Arctech Helsinki Shipyard managing director Esko Mustamäki commented that the order provides a good base work load for the company for the next two years.

"It is also a positive continuation of the icebreaking rescue vessel, that Russian Ministry of Transport ordered a year ago, and which we are building together with Yantar Shipyard", Mustamäki said.

The vessel measures 119.8m in length and 27.5m in breadth and is capable of breaking ice and helping heavy-tonnage vessels in ice, in addition to cargo transportation..

Additional supporting features of the vessel include towing of and fire-fighting on floating objects and other facilities in ice as well as open water, according to Arctech.

With total propulsion power of 18MW, the proposed vessel will have four main diesel generator sets, having cumulative power of 27MW and two full-circle azimuth thrusters.

Vyborg Shipyard will assist Arctech by providing the basic design and procuring major components required for the construction of the vessel including half of the hull blocks.

When delivered in August 2015, the vessel is proposed to be used in Baltic Sea waters for year-round operation and in the Arctic sea only during summer season.

Vyborg Shipyard managing director Aleksandr Solovyev said, "This order is undoubtedly the next step in the development of co-operation between Vyborg Shipyard and Arctech Helsinki Shipyard."

Image: Upon completion, the new icebreaker will be used in year-round operation in the Baltic Sea and in summer season in the Arctic seas. Photo: Arctech Helsinki Shipyard.