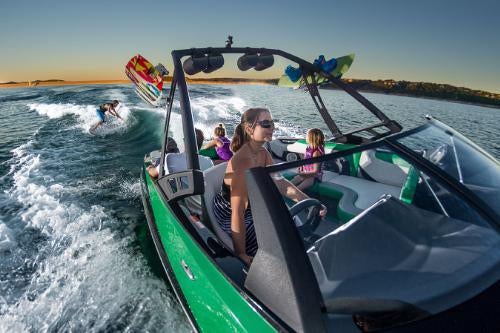 Axis Wake Research, an independent brand owned by US-based Malibu Boats, has introduced a new boat, the T22, at the National Dealer Meeting in Austin, Texas.

The 22ft machine features new improvements in hull design, as well as auto-set Wedge and SURF GATE®, which allow the boat to offer the best wakeboarding and wakesurfing experience.

The engine has an output of 330hp as standard and a maximum of 450hp, and comes with a helm that features a full-swivel driver’s seat.

T22 has a seating capacity for 15 people, including an optional rear-facing flip-up seat for a passenger to keep attention on the rider.

The walk-through design of the T22 provides passengers with open access to a ‘playpen-style’ bow.

Axis Wake Research CEO Jack Springer said that since 2009, the company has rocketed to number six in market share on the strength of two models, the A22 and A20.

"In August, we added a third picklefork model with the A24. And now, the T22 is an extraordinary boat that captures the essence of Axis, yet brings new improvements and features to the fastest growing brand in the history of our segment," Springer added.

"Everyone who has experienced the T22 came off the water raving about the ride, the customer’s choice of interior packages and the wake and wakesurfing wave with SURF GATE®."