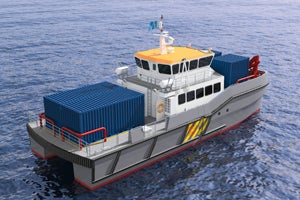 The WSVs will be built to DNV class to allow the vessels to operate without restrictions in European waters.

BLRT Marketex is a subsidiary of BLRT Grupp , which operates five shipyards, including two in Tallinn, Estonia, and is currently building four 20m WSVs for Sure Wind.

In February 2012, BMT won a contract from Australian shipbuilder Strategic Marine to provide the design for construction of eight new 20m WSVs.

Developed from BMT’s range of support vessels, each will have a length of 20m and beam of 7m.

The vessels will be built to DNV Wind Farm Service I notation and each of them will be powered by twin MTU 8V2000M72 diesel engines capable of speeds in excess of 25 knots.

All of the vessels will be built at Strategic Marine’s Singapore shipyard, allowing Njord to closely supervise and involve itself in the build project.