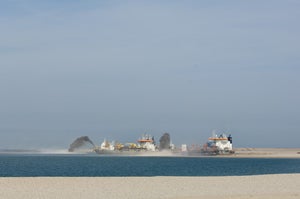 Puma, a joint venture (JV) between Boskalis and Van Oord, has completed the first phase of the Maasvlakte II harbour expansion at the Port of Rotterdam in the Netherlands.

Finance for the first phase of the Maasvlakte II was provided by the Port of Rotterdam Authority (PoRA).

The port had earmarked €1.9bn for the first stage of Maasvlakte II, including new land, infrastructure and connections to the existing port area.

The PUMA JV secured a €1.1bn contract in 2007 for the design, construction and maintenance of the project, with each partner taking a 50% share in the contract.

PoRA, which manages and operates the port and industrial area in Rotterdam, is currently working on the nautical accessibility of Maasvlakte II, including the installation of lights and buoys so that ships can enter the area by 22 May 2013.

Additionally, APM Terminals and Rotterdam World Gateway (RWG) have started the first phase of construction on a 2.7 million teu container terminal on the Maasvlakte II, with operations scheduled to commence in November 2014.

The Netherlands Defense Market - Attractiveness, Competitive Landscape and Forecasts to 2027

Future of the Netherlands’ Defense Industry - Market Attractiveness, Competitive Landscape and Forecasts to 2023