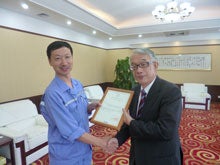 The statment confirms that DSIMS is in compliance with the Hong Kong International Convention for the Safe and Environmentally Sound Recycling of Ships 2009.

Established initially as a repair yard, DSIMS later started ship recycling operations at its 500,000m² site with an estimated recycling capability of 1,000,000 light displacement tonnage (LTD), making it one of the largest ship recycling facilities in China.

An SRFP is sought by competent authorities for providing authorisation that a ship recycling facility is in compliance with the convention.

ClassNK, an independent third-party organisation, confirmed that the SRFP met the requirements of the convention and that the facility is carrying out recycling according to its SRFP.

DSIMS is only the second ship recycling facility in the world to receive a Statement of Compliance.

The first SOC was issued to Jiangmen Zhongxin Shipbreaking & Steel in December 2012.

DSIMS is a subsidiary of Dalian Shipbuilding Industry Corporation (DSIC).