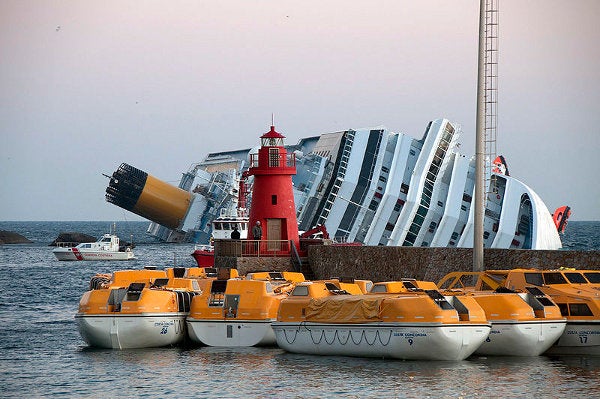 The Costa Concordia, which is sitting on its side in shallow water off the island of Giglio in Italy, will be pulled upright and refloated in what is being described as the biggest refloat in history.

Reconstruction work on the 290m long, 114,500 tonne vessel, which capsized off the Tuscan island of Giglio after hitting rocks on 13 January and sank, is scheduled to start at a cost of $300m.

Salvage crews will use huge cranes and air tanks to pull the half-submerged Costa Concordia cruise liner on to a submerged platform and refloat it so that it can be towed to a port on the Italian mainland.

In April, the salvage contract was awarded to US-based Titan Salvage and an Italian firm Microperi, which specialises in underwater ship repairs.

Teams from both the companies will start building a 40m² undersea platform on the seaward side of the vessel where the rock shelf slips away to deeper water.

Two cranes will be attached to the underwater platform next to the vessel to pull it upright, along with big water-filled tanks that will be fitted on the part above water.

Titan salvage said environmental protection will have top priority throughout the salvage operation.

Upon completion of the main work, the sea bottom will be cleaned and marine flora replanted.

The main operating base will be located on the mainland at nearby Civitavecchia, where equipment and materials will be stored, thereby avoiding any impact on Giglio’s port activities.

The Costa Concordia ran aground off the Tuscan island when the captain of the ship was said to have deviated from his planned route and struck a reef, creating a huge hole in the ship.

4,200 passengers and crew were aboard the ship when the disaster happened; 32 people died and the bodies of two passengers, an Indian and an Italian, are yet to be found.

Image: Costa Concordia will be pulled using huge cranes and air tanks on to a submerged platform, refloated and towed to a port on the Italian mainland. Photo: Rvongher

Pakistan: Data and VAS to compensate for voice

View All
View All
Data Insights