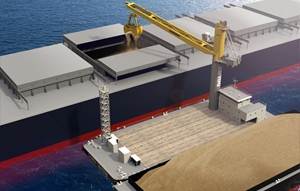 Damen Shipyards has launched its newly designed Stan Pontoon (SPo) 12032 at Jiangsu Ganghua Shipyard in China, one of the company’s partner yards.

SPo 12032, which has been built as part of a series of 34 pontoons currently under construction, is claimed to be the longest pontoon ever built by the shipyard.

It is classified under Lloyd’s Register and is equipped with a pair of DMT-winches, a Van der Leun electrical system and an International Paint system, while the ballast water system will incorporate Econosto valves and Azcue pumps.

The new pontoon is scheduled to arrive in the Netherlands in September on a semi-submersible vessel along with 16 smaller pontoons (varying between 41m x 13m – 91m x 27m).

Damen product director of pontoons & barges Frank Koppelaar said that the company is developing and building new pontoons and new barge types based on proven design and adaptations to changing market circumstances.

"We’re building our full range, from 30m x 11m barges to 120m x 32 m barges, and sell them from stock, so delivery times can be shortened to weeks and in some cases even days," Koppelaar said.

In addition, the company’s Pontoons & Barges have started construction of a second new design of a crane barge called CBa 6324, to be used for handling dry bulk and containers.

Currently, the company is building several new trans-shipment barges, with the first ready for delivery in November 2012 from Netherlands yard, while the second is scheduled for delivery in December from the Chinese yard. .

Crane barges three and four will be available in the first quarter of 2013.

The company is building more than 35 pontoons at its Chinese partner yards and it is also planning to build a new series of offshore accommodation barges in the near future.

Recently, the company launched the Damen Stan Pontoon 4113, which was ordered by Australian chartering firm Rhumb Maritme and is now ready for delivery.