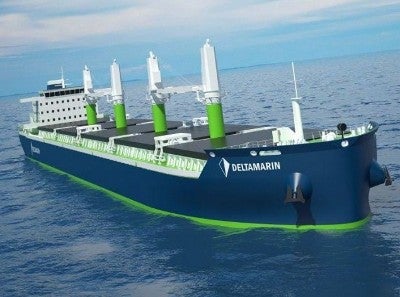 Service speed at design draught would be 14 knots, while model tests suggested that daily fuel oil consumption at design draught will be 18.1t including 15% sea margin, ISO conditions, while the calculated EEDI for the B.Delta43 is more than 25% below the required limit.

Tunisian ship owner Transbulk has ordered two B.Delta37 ships at Yangfan shipyard including options, which will have a length of 179.9m, beam of 30m and cargo capacity of 50,000m³.

At design draught and service speed of 14 knots, daily fuel oil consumption should be 17.7t including 15% sea margin, ISO conditions, with EEDI calculated to meet existing and future requirements.

As part of the detail design and technical procurement handling for the shipyards, Deltamarin will produce basic design, while site teams will ensure continuity from design to production.