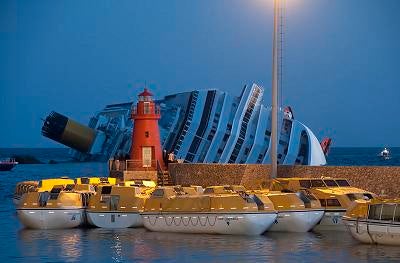 Dockwise, a Netherlands-based wholly-owned subsidiary of Royal Boskalis Westminster (Boskalis), has secured a contract worth approximately £20m from Costa Crociere to load and transport the Costa Concordia wreck onboard the Dockwise Vanguard.

Under the agreement, the ship will be loaded on to the Dockwise Vanguard as a whole and will be transported from Isola del Giglio to a location where it will be scrapped.

While the client has yet to make a decision in agreement with the local authorities on the final destination, the alternatives under review include scrapping the vessel in Italy.

The operation, which is planned for mid-2014, will require Dockwise Vanguard to make certain modifications in oredr to load Concordia.

With an open, flat stern and bow-less deck measuring 275m by 70m, the Dockwise Vanguard can transport cargo longer and wider than the deck dimensions.

To load cargo, the vessels’ ballast tanks are filled with water until the ship deck submerges below the surface.

Once the Dockwise Vanguard is semi-submersed, the floating cargo is brought in position above the deck.

The ballast tanks are then emptied, allowing the entire ship including the cargo to come above the water line.

According to Boskalis, which provided emergency response services during the Concordia accident, the project combines maritime services and assets across the breadth of the company.

Boskalis offers a wide variety of marine and contracting services for the offshore energy sector including subsea, heavy transport, lifting and installation through Boskalis Offshore and Dockwise, and towage and salvage through SMIT.

The company operates in around 75 countries across six continents and has a fleet of over 1,100 units.

Image: As part of the contract, Dockwise will load and transport the wreck of Costa Concordia, which capsized in January 2012 near the island of Giglio, Italy. Photo: courtesy of Rvongher.