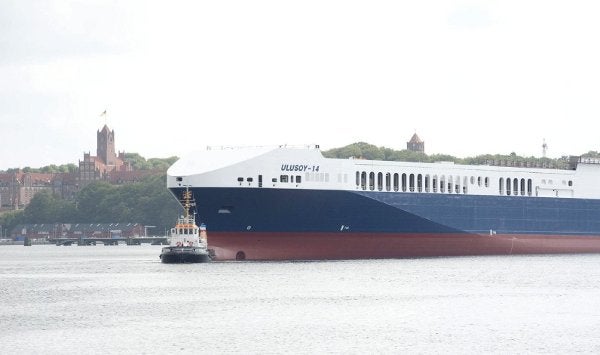 Both freight ferries were ordered by Ulusoy to operate on the Cesme-Trieste route, replacing four older ferries.

The new vessels will have about the same freight capacity as the old units, while consuming less fuel and emitting less waste gas.

The launched vessel, called Ulusoy 14, is the longest and biggest freight ferry ever built at the yard, with a length of 208m.

FLG shipyard managing director Peter Sierk said: "Building on the experience gained with the 14 ferries built so far for U.N RoRo, our engineers have succeeded in further optimising the latest designs to make them even more economic, efficient and eco-friendly."

FSG is planning to deliver Ulusoy 14 to the Turkish shipping firm in October 2012.

The second vessel under the order is planned to be launched in November 2012 and is expected to be delivered in January 2013.

Each will have space for 283 trailers and a loading capacity of 4,094 lane metres.

In addition to Ulusoy’s two RoRo vessels, FSG also has on order a RoRo freight ferry for Turkey’s U N Ro-Ro, a ConRo ferry for a Canadian shipping firm, two multifunctional project load vessels for Rolldock of Netherlands, two offshore seismic ships for UK-based WesternGeco and a RoPax ferry for CMAL of Scotland.