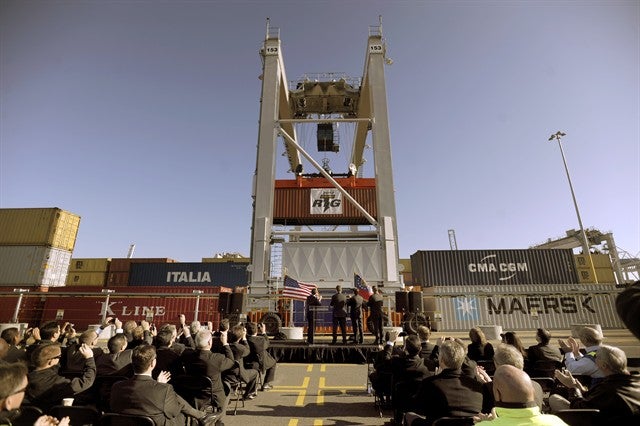 The Georgia Ports Authority (GPA) has unveiled four electrified rubber-tired gantry cranes (ERTG) at the Port of Savannah, making GPA the first to employ the crane in North America.

The new ERTGs, which are claimed to be a cleaner and more efficient method of operation, will cut fuel consumption by about 95%.

GPA executive director Curtis Foltz said that the changeover to ERTGs is a major milestone for the authority and the industry.

"This project is the latest in a series of GPA initiatives designed to increase the productivity and capacity of the port in environmentally responsible ways," Foltz said.

Konecranes, Conductix-Wampfler and Georgia Power have jointly developed the new ERTG system by providing the new power system and the electrical infrastructure for the cranes.

The new electrified ship-to-shore cranes and refrigerated container racks will help the Port of Savannah to lower its use of diesel by approximately 5.4 million gallons per year.

The ERTG works on mounted electrical equipment and switches between diesel and the electrical grid, with the cranes expected to operate on electrical power about 90% of the time.

The ERTGs are powered through 480-volt conductor rails installed on the container yard at the back of container berths 4 and 5.

The GPA’s electrified ship-to-shore cranes will reduce their power demand by about 35% by capturing energy from lowering boxes.

Image: The new electrified rubber-tired gantry cranes will cut fuel consumption by about 95% at the Port of Savannah. Photo: The Georgia Ports Authority.