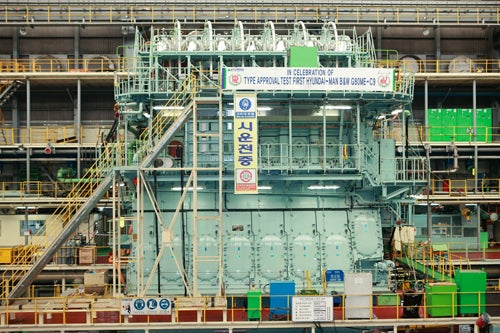 The test was attended by supervisors from 11 classification societies including ABS, DNV, LR and shipowners’ representatives.

One of the engines has been equipped on a 319,000dwt very large crude carrier (VLCC) owned by Greek firm Almi Tankers.

The other engine will be equipped on a 5,000teu containership owned by Thenmaris Ship Management.

HHI said the fuel and emissions reductions of the G-type engines would save the two owners around $2.9m and $1.3m a year, respectively.

Image: One engine was installed on Almi Tankers’ VLCC, while the other will be installed on Thenmaris Ship Management’s 5,000teu containership. Photo: Hyundai Heavy Industries.