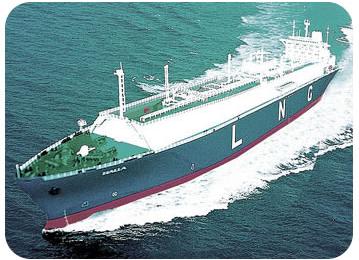 The 162,000m³ vessel, which is claimed to be the first vessel in the world to be built using the on-ground shipbuilding technique, was constructed with an investment of $186.4m.

The vessel is manufactured and assembled in the on-land shipbuilding area that has a 1,200t gantry crane, four jib cranes and a floating dock.

Initially, 270 large blocks, an LNG containment system, an engine and a propeller are built and assembled at the shipbuilding site and then the assembled vessel is moved out onto a floating dock by hydraulic skidding.

The LNG carrier is currently undergoing outfitting and painting work, and will be delivered by late July 2014.

The on-ground shipbuilding method offers benefits such as higher productivity and cost-effectiveness, it facilitates efficient utilisation of yard facilities and resources, and improves the safety of working conditions for workers.

HSHI plans to build ten of the 12 LNG carriers under the received order using the on-ground shipbuilding method.

Since the construction of the land-based building site in May 2008, HSHI has built 50 ships using the on-ground method; the current ship is, however, the first LNG carrier to be built on ground.