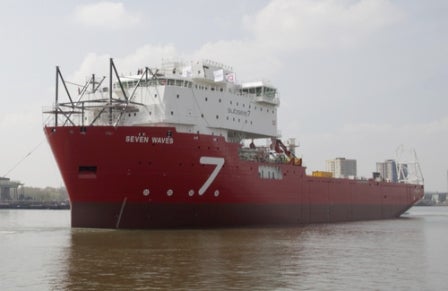 IHC will design and deliver an integrated automation system, full electrical installation and electrical machinery packages. It will also provide a pipelaying simulator to support the training of offshore personnel.

The vessels supplied to Subsea 7 have the same design as the recently launched Seven Waves. They will have an overall length of 146m, a beam of 30m and a Class-2 dynamic positioning system. They are equipped to transport and install flexible flowlines and umbilicals in water depths of up to 3,000m.

IHC will build all six 550-tonne vessels at its shipbuilding facilities in the Netherlands. They are expected to be delivered between the first half of 2015 and the second half of 2016.

IHC Merwede COO Bram Roelse said that the new orders will join four other ships that are currently being built for Petrobras to deploy in Brazilian waters.

Image: IHC will deliver three ships to Subsea 7 with the same design as the recently launched Seven Waves. Photo: courtesy of IHC Merwede.