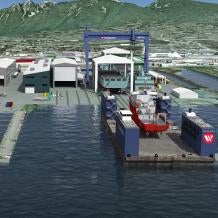 Under the deal, Imtech Marine will be responsible for providing platform automation, electrical solutions, electric propulsion and heating, ventilation and air conditioning systems for the vessel.

Imtech said it has already started engineering work on the vessel.

Imtech has been involved in the NSPS programme, which includes the construction of several navy and coast guard research vessels, as a technology partner of Seaspan Shipyards since October 2011.

The company is involved in the non-combat section of the programme, which is expected to include two joint support ships (JSS), each with a length of 175m, an 85m offshore oceanographic science vessel (OOSV) and three OFSVs.

The OOSV will be used to conduct oceanographic research along Canada’s eastern coast, while the OFSVs will be used for carrying out research into fish stocks and the development of local ecosystems along the western and eastern coasts of Canada.

As part of the programme, Seaspan will also construct a 140m polar icebreaker.

Imtech Marine Canada NSPS programme manager Stefan Nieuwenhuys said: "As a partner of Seaspan in this OFSV project for the Canadian Coast Guard, we will bring in our expertise for the ships’ automation, electrical infrastructure, electrical propulsion and air conditioning and climate control systems, as well as platform system integration."